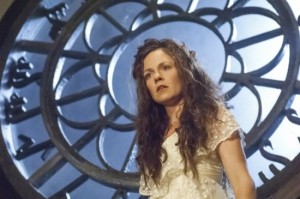 While taking what she thought was a private swim at Fair Haven, Freya (literally) runs into Killian, who also was in the pool after Penelope gave him permission. When he makes another flirty comment toward her, she laments the fact that he sounds like he’s waiting for her and basically tells him that it’s time to move on. The two get interrupted when Dash comes into the pool area and reminds Killian about a follow-up appointment, since it had been a week since the electrocution. Freya then makes a point to kiss Dash in front of Killian before leaving with him. Over at the library, Ingrid gets a visit from Penelope, as well as a gift that came from the renovations at Fair Haven. Namely, a photo with Ingrid and a little girl from about a hundred years ago, though Penelope thinks that it might be one of the Beauchamp’s relatives.

As Freya gets more spell training from Wendy, which has the unfortunate side effect of starting a fire in the yard, Ingrid freaks out over Penelope, as she’s now curious about what happened during her past lives. Joanna doesn’t want her to carry the baggage of her former lives into this life and when Ingrid leaves, tells Wendy that she doesn’t want Ingrid t know because what happened may cause her daughter to forgive her sister. At the follow-up appointment, Killian gets told to come back for a blood panel and things seem to be improving between him and Dash as far as how they interact; however, Dr. Amy Matthews comes into the room talking about the osseous tissue sample they collected from Maura Thatcher’s throat, not knowing that Killian was in the room. The two flirt until he leaves, just as Freya comes into Ingrid’s room and finds that her sister has been doing research into the identity of the little girl in the photo, who she claims is Athena Browning, daughter of Archibald Browning, the man who built Fair Haven. She mixed ingredients from a remembrance spell into a brownie in hopes of learning more, but for the moment, it doesn’t seem to be working. However, once Freya leaves the room, it kicks in and Ingrid falls onto the bed, writhing in pain.

Ingrid then flashes back to 1906, where she finds herself at Fair Haven. Amid all the naked flesh in the room, she finds a handsome man who she immediately goes to; he takes off her necklace, paints the shifter’s symbol on her chest, and kisses her before it’s revealed to be Archibald Browning. Back at the hospital, the test results on the thing from Maura Thatcher confuse Dash and Amy, as they’re scientifically impossible. However, she recounts a similar case from Louisiana in 1995 – a woman thought she was cursed by a voodoo priestess before getting the matter out of her throat. There’s no way to cross-reference their results with the results from two decades ago, though, because several involved in the case died of lung infections and the hospital itself was demolished years ago. While Freya comes in and nabs the sample when Amy and Dash leave, 1906-Ingrid heads to the Beauchamp Apothecary, where Joanna, Wendy, and her have found a way to use their magic without drawing attention to themselves. After helping a woman with sore hands, the trio deal with Archibald’s presence, as he brings a gaggle of his followers while looking for feverfox for a sick disciple. They deny that it’s there and as he leaves, he invites them over to Fair Haven.

Freya takes the matter to Wendy, who throws it in the fire and tells her that it’s Ramu Mortium, the branch of death. Whoever touches it will slowly die from fluid build-up in the lungs and Freya blames Wendy for doing the spell on Maura, which she thinks is responsible for the existence of the branch. However, it’s not so, as Freya died from the same thing some 300 years ago; luckily, they’ve learned how to combat it and Wendy gives her the recipe for a drink that anyone who touches the branch, including Dash and Amy, have to drink in order to reverse its effects. Meanwhile, 1906-Ingrid finds Archibald, who she’s been seeing right under her family’s nose, reading to daughter Athena and brings in the feverfox from the shop. It is to be used on Elizabeth, an older disciple of Archibald’s who gives him every dollar she’s got for the chance of being young again. Once Archibald and Ingrid clasp hands and chant, the spell does work and Elizabeth is then to be prepared for initiation later that night.

Under Wendy’s guidance, Freya does the potion at the Bent Elbow and serves several rounds to Amy, Dash, and Killian under the guise of celebrating the medical miracle that the former two are about to uncover. She then picks a fight with Dash when he says something about how she’s a distraction from the stress of work, as Freya wants to be a part of every aspect of his life and doesn’t want him to hide anything from her. Dash spontaneously offers to marry her this weekend at the courthouse and Freya accepts, even though as Killian points out, Penelope would lose her mind. While in bed together, Archibald tries to get Ingrid to agree to tell her family about their 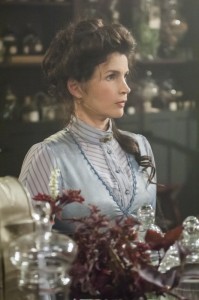 relationship, but she knows that they would just think that he was spelling her. She says that she was sleepwalking until she met him and that she’s looking forward to returning to where they came from, where she’ll be his wife and unashamed of the connection that they have. Their tryst gets interrupted when several people come into the room, one carrying Elizabeth, who had an adverse reaction to the feverfox. Bleeding from the nose and mouth, she’s already dead and they plan to get rid of the body in the catacombs; Archibald suggests that he and Ingrid get married that night, only for Elizabeth’s brother to storm into New Haven demanding to see his sister. Though he threatens to bring 20 men to pull her out of the compound, Archibald tells him that she’s dead before snapping his neck, annoyed that Ingrid wouldn’t kill him first.

As Freya, Amy, Dash, and Killian head to the Fair Haven pool and decide to explore the newly discovered catacombs, wedding dress-clad 1906-Ingrid runs to the shop to gather a few things for her own elopement. However, she’s caught by Wendy, who tries to convince her that Archibald doesn’t love her, that no such place exists where they can openly and honestly practice their witchcraft. Archibald then arrives with Athena, attempting to bring Ingrid with him, and uses his magic to slam Wendy against a wall. He wants Ingrid to kill her, but when she hesitates, Wendy uses her own magic to shoot a silver ball at him. Unfortunately, Ingrid jumps in front of him and takes the punishment, which sends her over the railing at the shop and kills her. In the catacombs, Freya apologizes to Killian for ever hurting him and follows the sound of hushed whispers to find an entire tree of Ramus Mortium. She bumps into Dash and hears how he knew he would marry her from the moment they met and how it took all his strength not to propose to her that first night. They then agree to hold the wedding as planned, a splashy affair meant for both of their families.

Joanna wakes up Ingrid and tells her about the day she died, how she had a nightmare that she was in danger and showed up when it was too late. Joanna used a knife to stab Archibald, causing him to completely disappear, and inadvertently cut his daughter in the back in the process. After healing Athena, Joanna tells Wendy that Freya is going to be dead by sunrise since the girls always died on the same day and blames her for not telling her about the affair sooner. She thinks that they could have put a stop to things before they got too out of hand and that ended up being the last time the two spoke until Wendy reappeared last month. Joanna ended up giving Athena to two women from the coven and spelled them to forget where East End is; she tracked the girl until she died in the 1960s. Meanwhile, Dash reappears in the catacombs and finds the tree of Ramus Mortium, taking one spool with him.

While Ingrid blows off Wendy in the garden, Freya and Dash meet with Penelope, who they assure they’re going to get married “the right way.” We then see a knife scar on Penelope’s back, indicating that she’s, in fact, Athena Browning.

Additional thoughts and observations:
-“Thanks for nothing, magic brownies.”
-That was a heck of a twist, right? I figured that there was something about to come out about the Gardiners and I assumed that there would be recognizable bodies stored in the catacombs (one of Freya’s past selves?), but the show did a good job in faking out both that possibility and a huge Dash reveal, although having him coming back to take the branch means that something major is coming. Good for them for getting Penelope involved in the action and for having the patience to put off revealing her role in everything. If you go to the trouble to get someone of Virginia Madsen’s talent, you must give her something important to do and I have a feeling she’ll be a major part of the rest of the season.
-Matthew Del Negro! He’s a prime example of That Guy – someone you see in everything and whose face you recognize but whose name you might not know. He’s been in a lot this year, though, with Mistresses, Rizzoli & Isles, and Teen Wolf, to name a few, and I’m always happy to see him, both in terms of his physical appearance (can we discuss the shirtlessness? or the suit?) and his overall charisma.
-Now that we know Penelope is Athena, having her bring the photo to Ingrid was delightfully antagonistic, a way of taunting her without putting herself in the line of fire.
-I wonder what’s going to happen to Killian now that he took a drink of the antidote that Freya concocted. It was only a sip, but with how powerful the Beauchamp magic is, it might not be long before he’s forced to deal with its effects. Might Freya have to reveal that she’s a witch in order to save him?
-As I’ve mentioned before, I love the way the show implements flashbacks and appreciate that we got such an extended look at who the Beauchamps were in the past. It puts the entire series into better perspective, further deepens the characters and their relationships with one another, and allows for the show to play around in terms of look, all three very positive things for the show’s future. Plus, it gave a hint as to what Wendy can do, which we haven’t really gotten a good look at thus far.
-As far as Athena “dying” in the 1960s, could she have gotten powerful enough to cloak her location from Joanna? Also, do you think that we’ll see Archibald again this season?
-Next week on Witches of East End: Ingrid discovers something startling from her past, while a novelist comes to East End to research his book and Wendy tries to get serious with Leo.