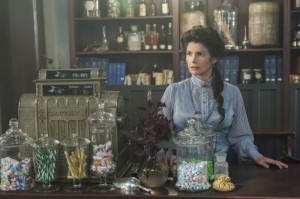 Wendy and Joanna may have helped Maura Thatcher find a state of peace inside the psych ward that the former’s spell drove her to, but they still haven’t done anything about the existence of the shifter themselves, as the creature is still lurking in the shadows of East End. With the death of Vidar, more of his kind were said to be on their way to town in hopes of ending the Beauchamp bloodline once and for all; for now, though, any shifters in town have kept a low profile, seemingly waiting for a chance to hit the Beauchamps when their defenses are down and when they’re separated from one another. But is now the time for one of them to strike?

On the next episode of Witches of East End, Wendy gets taken captive at the library by “Ingrid,” who is likely the shifter taking advantage of an opportunity to isolate Wendy without the other Beauchamps around. While each woman is powerful in her own right, the foursome combined is a force to be reckoned with, unable to be stopped by even the mightiest of supernatural beings. However, with Ingrid likely unconscious/incapacitated and Joanna and Freya elsewhere, Wendy will have to figure out a way to escape the shifter and alert her family about its identity change, as Joanna no longer seems to be the focus of the shifter now that its become Ingrid and came after Wendy. What will it take for Wendy to make her great escape and warn the other Beauchamps of the threat closing in on them?

Elsewhere on Witches of East End, Ingrid discovers something startling about her past, while a novelist comes to East End to research a book, Wendy thinks about getting serious with Leo, and Joanna reads Freya’s tarot cards.

Why do you think the shifter is targeting Wendy instead of Joanna? What will Ingrid discover about her past that tops the knowledge of her affair with Archibald Browning? Are Freya’s tarot cards going to confuse her even more regarding her feelings for Killian?