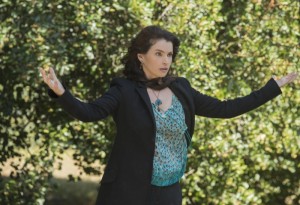 While Wendy got something out of her search for the Himalayan Stamped Crown, namely time with handsome entomologist Leo Wingate, it was began with somewhat good intentions, as she wanted to nab the butterfly and use it to help Maura after the incident at the Bent Elbow. Wendy may love her family and be the Beauchamp most willing to show you her powers, but sometimes, even those who know their own strength can go a bit overboard or take out their aggression in a way that doesn’t fit the perceived slight. She was right to be upset at how out-of-line Maura was and the type of scene that she was creating; it’s just that her attempt to shut the woman up resulted in her being harmed and that’s not what the Beauchamp family does. However, on the next episode of Witches of East End, a guilty Wendy has made matters worse thanks to the spell that she performed in Maura’s hospital room.

Again, she had the best of intentions by doing the spell, as she wanted to undo the damage she did earlier and keep Maura alive, as much of a hole as her death would leave in the case against Joanna. However, the butterfly didn’t cause Maura to heal properly and instead, has invited a seemingly endless amount of bugs into her life – bugs at her workplace, bugs all over her skin, bugs on other people. Though it’s possible that it’s a temporary and mostly visual side effect of the Stamped Crown, it’s still a bit of psychological torture that reeks of Wendy wanting to put Maura through the wringer before she eventually gets better. As spontaneous and free-spirited as she may be, Wendy’s a smart woman and an experienced witch, so there’s a small chance of this being a malfunction or of her doing something incorrectly. More than likely, she knew how terrible Maura had made her sister’s life since the shifter murdered Bill and wanted to send a message that she shouldn’t mess with the Beauchamps (or anyone else) ever again.

Elsewhere on Witches of East End, Ingrid finds a unique way to mourn for Adam, while Joanna and Harrison take their friendship to the next level and Freya deals with Dash’s ex-fiancée when she returns to town.

Will Wendy be able to reverse the spell or find some way to help Maura? How will Freya react to coming face-to-face with Elyse? Is getting together with Harrison the best thing for Joanna to do right now?