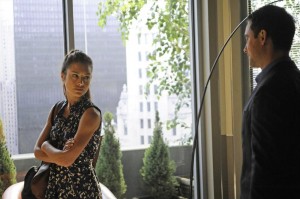 Although part of her was guilty for straying from her marriage, Sara was enlivened by experiencing the passion with Jack that had been drained from her relationship with Drew. She got to experience that period of infatuation in her time with the attorney that often fades as familiarity and comfort set in, to relive the best parts of a relationship and only show as much of who she truly was as she wanted. That way, there’s no risk of (real) feelings being caught and there’s not as much emotional investment, no matter how many proclamations of love that were exchanged between the two. However, in her dewy-eyed daze, she forgot to cover her tracks as well as she could and now Drew, as tenacious as his wife is passive, has suspicions about her suddenly improved mood.

On the next episode of Betrayal, Drew’s obsession with finding out the true source of his wife’s happiness, as well as the photographer of the provocative photo that was left on her camera, grows. We’ve seen thus far on the series that when he latches hold of something, be it a photo or an idea to help a case, there’s no way for him to let go, but he might be just a little too late, since both Sara and Jack have felt the guilt of what they’re doing creep up on them to the point where they’re maintaining some distance. Now that the two are nearly out of the honeymoon phase, real life is staring them in the face and decisions will have to be made regarding what exactly their relationship is, how serious their feelings for one another are, and whether or not they’re willing to give this a shot. For the duration of their affair, Sara and Jack have been living in a bubble and once it’s burst, will their relationship look as good as it once did?

Elsewhere on Betrayal, Sara becomes increasingly worried that her affair with Jack will be exposed, while Jack makes an important decision that will have major implications.

How far will Drew’s obsession over finding out what his wife is doing go? When will Sara’s affair with Jack be exposed? Should the two cool things off for a while or have they reached the point of no return in their relationship?