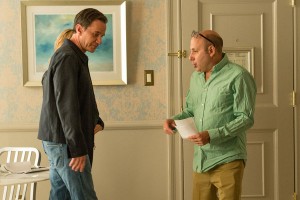 USA has announced the 2014 return dates of Suits, Psych, and White Collar, as well as the series premiere date of Denis Leary EMT comedy Sirens.

The eighth season of Psych is set to premiere Wednesday, January 8th at 9:00 with an episode that finds Gus and Shawn traveling to London and coming face-to-face with Despereaux. Other episodes this season include “A Nightmare on State Street” and a remake of season one episode “Cloudy with a Chance of Murder,” while season eight guest stars include Mira Sorvino, Anthony Michael Hall, and Phylicia Rashad. Season five of White Collar returns from hiatus on Thursday, January 9th at 9:00 with four new episodes. While Neal continues to be blackmailed by Curtis Hagen, he, Rebecca, and Mozzie get closer to cracking the Mosconi Codex and a dangerous secret gets revealed.

Do you like Suits better as a Thursday night show? How do you think Sirens will do? Which episode of Psych are you most looking forward to this season?