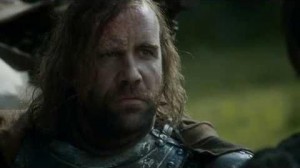 Coming Up on Game of Thrones: “The Rains of Castamere” [link]
While Robb presents himself to Walder Frey, Jon faces his hardest test yet and House Frey joins House Tully.

Orphan Black Season Finale Preview: Something’s Wrong with Cosima [link]
After already losing Katja and Beth, Sarah and Alison are in danger of losing Cosima, who has developed mysterious nosebleeds.

The Fosters: Spoilers for the First Three Episodes [link]
The ABC Family drama, about a foster family that takes in a troubled teenage girl, premieres Monday, June 3rd at 9:00 following the series finale of The Secret Life of the American Teenager.

Defiance 1.07: A Razor Rain Storm is Coming [link]
A Razor Rain keeps the citizens of Defiance indoors, forcing interactions and conversations that wouldn’t have happened otherwise, and Irisa’s visions lead her to the Spirit Riders.

The Fall: Available Today on Netflix [link]
Gillian Anderson’s five-episode BBC drama The Fall made its Netflix debut this week. The show has already been renewed for a second series.

News Roundup: Cassadee Pope to Return to The Voice on June 4th [link]
Among stray headlines this week are The Voice‘s season three champion returning to the site of her victory, Rob Lowe signing on to play John F. Kennedy, and the first sneak peek of BET’s Being Mary Jane being released.

Baby Daddy Season 2: Spoilers for First Three Episodes [link]
The love triangle between Ben, Riley, and Danny gets even more complicated, while there are endorsement deals and new jobs to deal with.

Orphan Black Marathon to Air Saturday, June 1st [link]
All nine episodes of the BBC America sci-fi drama will be aired prior to the season finale.

The Killing Season 3 Sneak Peeks: Holder Pays Linden a Visit [link]
After 18 months apart, Holder and Linden are back together again. But will things be exactly the same as they were before?

Hannibal Renewed for Season 2 by NBC [link]
Weeks after their upfront presentation, NBC renewed Bryan Fuller’s Hannibal for a second season, which will air no later than midseason. The drama’s season finale is set for June 20th.

Revenge: Ashley Madekwe Won’t Return for Season 3 [link]
Ashley Davenport is no longer a part of the Hampton social scene, as Ashley Madekwe’s option for season three was not picked up.

Hit The Floor 1.02 Sneak Peeks: What Does It Take to Be a Devil Girl? [link]
Ahsha may have made the Devil Girl squad during the series premiere of Hit The Floor, but the hard part is just now beginning.

More Mad Men Theories: Who Is Bob Benson and What Does He Want? (Vulture) [link]
Just who is Bob Benson, really? Vulture offers several theories as to his true identity and intentions this season on Mad Men.

Funeral Plans for Network TV Freshman Casualties (Hitfix) [link]
Say goodbye to the shows that didn’t make it to a second season. There sure were a lot of ’em.

TV’s Hits and Misses (TVGuide) [link]
Which shows during the 2012-2013 TV season either built an audience or debuted to boffo numbers? And which were the biggest disappointments of the season and will be limping into 2013-2014?