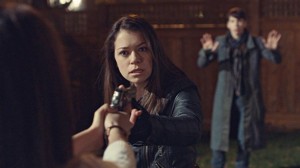 BBC America is set to run a marathon of the first nine episodes of acclaimed sci-fi drama Orphan Black before the show’s first season finale. The series, which stars Critics’ Choice nominee Tatiana Maslany in a variety of roles, centers on a British ex-patriot swept up in a grand conspiracy when she finds out that she’s a clone. Just how much danger has she put herself in by getting into contact with others like her and trying to figure out exactly who they are, where they came from, and why they were created? Will Sarah be prepared for the answers that she finds and the shadowy figures she encounters in her quest for the truth?

Listed below are the times, titles, and descriptions of the first nine episodes of Orphan Black, as well as accompanying articles for each.

12:00 p.m. – “Natural Selection” (Watch a Sneak Peek and The First Scene)
Sarah, an orphan, gets caught up in a deadly conspiracy after learning that she is a clone. In the opener, Sarah witnesses the suicide of a woman who looks just like her and assumes the victim’s identity in hopes of escaping her troubled life.

1:00 – “Instinct” (Watch a Sneak Peek)
Sarah continues to impersonate Beth and gets her a second chance on the force.

2:00 – “Variation Under Nature” (Watch a Sneak Peek)
Sarah’s fake detective ruse stretches thin when the police find the body that she buried.

3:00 – “Effects of External Conditions” (Watch a Preview)
Sarah gets closer to finding the killer, but her efforts threaten to end her chances of a reunion with her daughter.

4:00 – “Conditions of Existence” (Watch a Preview)
Evidence suggests that the orphans are part of an ongoing experiment. Sarah suspects Paul, but her probing inadvertently triggers Paul’s own investigation.

5:00 – “Variations Under Domestication” (Watch a Sneak Peek)
Alison’s paranoia puts all of the orphans at risk. Meanwhile, Sarah must decide who to trust with her secret.

6:00 – “Parts Developed in an Unusual Manner” (Watch a Preview)
Sarah confronts the conspiracy head-on, while the trust between herself and Paul weakens. Meanwhile, Cosima grows closer to Delphine and the mysterious Dr. Leekie.

7:00 – “Entangled Bank” (Watch a Preview)
Sarah’s actions pit the orphans against each other; Paul tries to cover up Sarah’s existence; Alison takes vengeance on her suspected monitor.

The season finale of Orphan Black airs Saturday, June 1st at 9:00 on BBC America. You can check out a preview of the finale here.

Is there anything specific that you want to see happen during the Orphan Black season finale? What do you expect to happen in season two? Which of the clones do you consider to be your favorite?