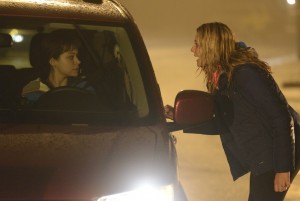 Alison nearly ruined her by all accounts stable relationship with Donnie by hitting him with the golf club and holding him for questioning on Orphan Black. The paranoia that was brought on by the emergence of Sarah and suicide of Beth reached its zenith the moment when she broke out the hot glue gun, something that could have turned her happy suburban existence into a more tragic, lonely life that she’s not ready for. Now that she knows her husband is in the clear, and is back from the couple’s retreat they were on last week, it’s time for Alison to begin dealing with her actual monitor and catching up on everything that Sarah learned while she was away.

On the next episode of Orphan Black, Alison is seeking vengeance on the woman she suspects is her monitor. There’s still no concrete proof as to the authenticity of Alison’s hunch, but with what happened with Donnie and the danger she’s feeling from her association with Cosima and Sarah, she might be willing to chance that just so she’d get a shot at taking out the monitor. Granted, killing her monitor might end up having the completely opposite intended effect, drawing the eyes of Dr. Leekie and Olivier to her and putting her family in danger; if she’s right and finds a way to kill the monitor, though, she might have enough time to flee the country, do other damage against the corporation that created the orphans, or gather information needed to better understand who she is and, more importantly, why she is.

Elsewhere on Orphan Black, Sarah’s actions pit the orphans against one another, while Paul does his best to cover up Sarah’s existence and protect them both.

Has Paul done what was needed to prove his loyalty to Sarah and show that he’s on her side? How long will the orphans be divided against one another? Is Alison right about who her monitor is now?