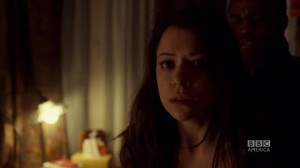 While Cosima’s decision to trust Delphine ultimately resulted in Dr. Leekie finding out about the existence of the other identicals, the grad student has played an important role on Orphan Black. She’s the major source of scientific knowledge for Sarah and Alison and someone who has access to material that can fill in the cracks of their understanding about themselves. She’s not been correct on everything she’s stated this season, but Sarah and Alison wouldn’t know as much as they currently do without having Cosima around and therefore, their journey to piecing together their pasts would still be quite stunted. However, they might have to assume responsibility for the technical aspects of DNA and what it means to be a clone, as there’s something wrong with Cosima.

On the next episode of Orphan Black, Cosima’s nose is mysteriously bleeding and no one knows why. Could it be that the clones are devolving and this is the first sign of their DNA transformation? The three still haven’t figured out why Sarah was able to biologically conceive a child, so it’d be understandable if they hadn’t made the advancements in their quest for knowledge necessary to explain the sudden bleeding. It’s also possible that the clones have a certain expiration date that’s nearing and rather than simply altering forms, they’ll cease to exit and literally fall apart until that occurs. However, there’s a slight chance that this could be a uniquely Cosima problem, which could be the result of the genetic sequence that’s unique in every identical. If so, what could Sarah and Alison be looking forward to in the near future?

Elsewhere on Orphan Black, Art begins looking into Sarah Manning on his own and inadvertently intervenes in her confrontation with Helena, while the orphans have to decide if they’re willing to forgive their creators when Sarah is forced into an altercation with their enemy.

The season finale of Orphan Black airs Saturday at 9:00 on BBC America. The show has already been renewed for a second season.

What do you expect to happen during the Orphan Black season finale? Will every identical make it to season two? Is the woman who was on the phone with Dr. Leekie next season another clone?