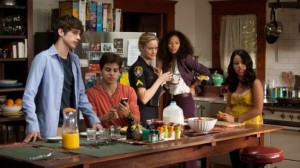 Lena and Stef have three kids, two jobs, and a whole lot of complications in their atypical family life. The couple, who have adopted twins and a biological child between them, seem to be stretched about as thin as they can go these days, but extenuating circumstances this season on The Fosters will force them to see just how much more they can bend before they break. Are Lena and Stef prepared for the possibility of raising another child? Or is their house as full as it can get, with a new addition likely forcing everyone to jockey for position and fend for themselves?

Listed below are the dates, titles, and descriptions of the first three episodes of The Fosters.

Monday, June 3rd – “Pilot”
The premiere episode of The Fosters follows a multi-ethnic family mix of foster and biological kids being raised by two moms. Stef Foster (Teri Polo), a dedicated police officer, and her partner Lena Adams (Sherri Saum), a school Vice Principal, have built a close-knit, loving family with Stef’s biological son from a previous marriage, Brandon (David Lambert), and their adopted twins Mariana (Cierra Ramirez) and Jesus (Jake T. Austin). Their lives are disrupted in unexpected ways when Lena meets Callie (Maia Mitchell), a hardened teen with an abusive past who has spent her life in and out of foster homes. Lena and Stef warily welcome Callie into their home thinking it’s just for a few weeks, until a more permanent placement can be found.

Callie is quick to observe that the Fosters are an atypical family, and her blunt commentary hits a nerve with Jesus and Mariana who are struggling with their own identities. The twins have the opportunity to meet their birth mother, but they aren’t sure if they are emotionally ready, or if they want to share the experience with their adoptive moms. Callie also discovers that Mariana is harboring a secret that could land her in serious trouble.

Brandon, a talented musician with a kind soul, lends Callie a hand in navigating the classrooms and social scene at the Fosters’ high school, Anchor Beach Community Charter School. He’s faced with a tough decision when Callie decides to ditch school to reconnect with someone from her past. What happens next will determine if Stef and Lena made the right choice in taking a chance on Callie, and whether they have room in their home – and their hearts – for one more.

Monday, June 10th – “Consequently”
Lena and Stef decide to let Brandon off the hook for running off with Callie to rescue Jude, but Mike disagrees and tensions flare. Brandon ends up grounded, but he makes plans to sneak away to see Talya while her parents are out of town. Jesus stops taking his medication to cover for his twin sister and the pills she stole, but he becomes easily agitated and gets into a fight with another kid at school. When a student is discovered with the pills, Callie becomes an instant suspect, and Mariana struggles with her mounting guilt over letting someone else take the fall for her actions. Meanwhile, a secret romance blossoms between Jesus and Mariana’s best friend, Lexi. The Fosters make arrangements at home to ensure that Callie and Jude are more comfortable, but sharing their space may prove difficult for the Foster teens.

Monday, June 17th – “Hostile Acts”
The Fosters cope with a crowded house but when Mike suggests that Brandon come live with him, Stef argues that it’s not Brandon’s decision, resulting in a heated argument with her son. Meanwhile, Lexi and Jesus resolve to end their budding relationship but find that their attraction to one another may be too hard to resist. Callie openly disapproves of Mariana letting Jesus take the fall for stealing his pills but when Timothy, Callie’s teacher, gives her an assignment to write about guilt in a journal, it drudges up her own dark secrets and a mysterious name from her past.

The series premiere of The Fosters airs Monday, June 3rd at 9:00 on ABC following the series finale of The Secret Life of the American Teenager.

Will you be watching The Fosters this summer? How do you think the first three episodes sound? Is the show going to pair well with Switched at Birth?