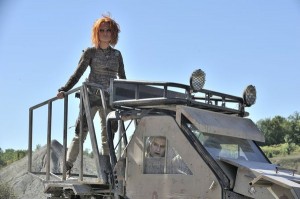 In the world of 2046, cities are a lot more insular than they are now. Whereas 2013 is marked by how quickly information is transmitted and how easy travel has become, places like Defiance have had to rely on its citizens rather than the outside world in order to survive. This may make them better as individuals, sharpening their skill sets and allowing them to grow closer to their community, but it makes any disaster that much more nerve-wracking. Is now the time when they’d actually need some important backup? Would they be able to survive using only their wits, the resources around town, and little else?

On the next episode of Defiance, the citizens of Defiance have been forced indoors by a deadly Razor Rain storm, thereby putting them in close quarters with one another until it passes. While this likely won’t be much of a problem for most, as long as they have proper food, shelter, and weaponry available, it will force certain relationships to develop perhaps before they’re ready. In turn, truths will be prematurely sussed out, threatening several preexisting connections in town and potentially changing the way things have been for quite some time. Defiance is a town that operates best when things are calm and the status quo is unchallenged, as tradition and normalcy have been in limited quantity since the Votan invasion; however, there are times when change can’t be avoided and it looks like they’ll have to adjust accordingly once the last of the Razor Rain subsides. But just how different will things be after the rain?

Elsewhere on Defiance, Irisa is led back to the Spirit Riders, including an obviously affected Sukar, thanks to visions she’s been having.

What will the residents of Defiance find out about one another during their time hiding from the storm? How will relationships change once the Razor Rain lets up? Are Irisa’s visions leading her to a certain place?