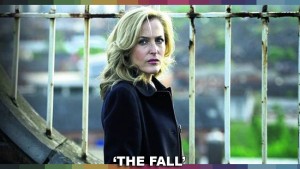 While they might not have produced this gem of a television series, Netflix certainly got the golden ticket when they won the rights to air BBC 2’s production of  The Fall in the United States. In an interesting turn of events, those of us in the US will have the opportunity to see the entire first series before it finishes out its run in the UK.

Jump starting as the top drama to his BBC 2 in eight years, The Fall stars Gillian Anderson (X-Files, Hannibal) as Stella Gibson, as a special detective called into Belfast to look into a murder that she quickly ties into a second murder, believing they have a serial killer on their hands. Stella is a cold, calculating woman who is greatly flawed, with a seemingly insatiable need for sex.

Jamie Dornan (Once Upon a Time) co-stars as the killer. Yes, this is one of those shows that tells you right up front who the killer is and the mystery is in why he does it and how he gets away with it. Gorgeous, happily married with a family and working as a grief counselor, he’s the least likely candidate for a serial killer and that makes him the best character to be one.

Essentially we have two stalkers, equally as effective at their job, on a collision course. Of what nature and how and when they will meet is all part of the fun in watching this otherwise intense drama.

The rest of the cast is recognizable from many different sources, depending upon where you watch your television. Many come from UK soap operas and three gentleman can be found on Game of Thrones. Archie Panjabi (The Good Wife) even makes an appearance as the medical examiner.

Watch The Fall. And like all Netflix series, be prepared to hunker down and lose a good stretch of time because once you start watching, it’s going to be hard to stop.