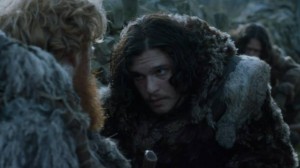 It would appear the struggle for power strays from King’s Landing in episode 9 of Game of Thrones, “The Rains of Castamere” as we’ll see Arya continue to fight for her independence upon one of the land’s most powerful men, Sandor “The Hound” Clegane. Does she stand a snowball’s chance in hell of escaping him? More importantly, at this point, why does she want to? He’s already told her he’s taking her to her brother to collect cash. I can’t think of two more capable hands to accomplish that task. Sometimes I don’t think Arya can see the forest through the trees.

Robb and Catelyn seem prepared to take someone down, but exactly who their target is appears uncertain via this particular clip. I don’t think they’re ready for the big game yet.

As Dany makes battle plans, she also has her hand intertwined with Daario’s, which might be going unnoticed by Jorah, who has always had a candle lit for the girl he protects. What difference might a new love interest make to Dany and can she really trust him fully at this juncture?

Jon Snow is poised and ready to take on some crows in a battle and his little brother Bran is circling Castle Black with his squadron of oddball friends.

This is, as we like to say, a preview to the penultimate episode of season 3 of Game of Thrones. The story hardly seems prepared for an ending in just one more episode does it? Check out the preview and let’s hope for the best. Second 4 will be a long way off. Maybe they’ll get more than 10 episode to finish up this chapter of the saga. Catch it  June 2 at 10:00 ET on HBO.