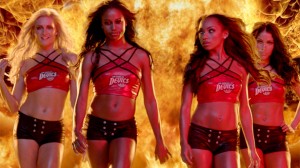 Ahsha is a sheltered young woman looking for a chance to make it big and on VH1’s Hit the Floor, she gets just that after auditioning for the Devil Girls, the dance team for the Los Angeles Devils. Her mother, a former Devil Girl herself, may disapprove of the way Ahsha plans to use her dance background, but there’s no stopping the young girl from entering into the dangerous, tempting world of professional basketball – and the ladies who gets the crowd hyped.

Among those that Ahsha will meet in her rise up the dancing ladder are Olivia, the manager of the Devil Girls whom she’ll have to impress in order to lessen her time as squad scrub; Jelena, the temperamental Head Devil and someone who doesn’t let go of the spotlight easily, especially to new girls like Ahsha; and Pete, the Devils coach who has forbade his players from fraternizing with the Girls. If that wasn’t enough, there’s a mystery surrounding the disappearance of former Devil Girl Mia that won’t seem to go away. Could there have been foul play involved in what happened with Mia? If so, who is the most likely culprit: the shrewd manager, the diva captain, the basketball coach, or one of the players, looking to cover something up?

Will you be watching Hit the Floor? Do you think the show will have the same type of success that Single Ladies had for the network? Would you like to see more networks putting pilots up ahead of their television debut?