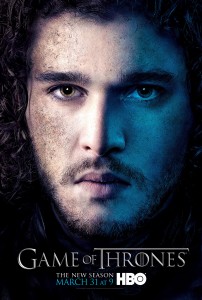 As the days tick by, expect to get more teasers of the upcoming premier of Game of Thrones Season 3, Sunday, March 31st on HBO. In this particular trailer, there’s a little something for just about everyone.

A hint of the Lannisters: A reminder that nobody has dared kill the dreaded and woefully inept King Joffrey; Tyrion opining that he has lost blood for his family (which will most likely go unnoticed and unrewarded); Jaime battling it out in a sword duo with Brienne of Tarth (seriously, he’s called her the ugliest creature alive, but I can’t be the only one who feels the sexual tension there!) and Stannis being manipulated by Melisandre again to believe he is the key to all things. Everywhere. Period.

There are glimpses into the lives of the Starks: Rob realizes he is winning battles but losing the war, Arya shouting out for someone to burn in hell, Bran skillfully mastering the craft of archery and Jon Snow (an honorary Stark bastard) talking about his freedom, which would appear to be triggered due to his lusting after a certain lass named Ygritte. Or, as Mance Rayder believes, his desire to be a hero.

Finally, we see Daneryx, looking lovely in blue, sailing across the sea, her dragons at her side, or rather flying along side the ship on which she rides. Ser Jorah is still giving her counsel and it would appear, initially, that her darkest times may have passed.

All of that means little out of context, as we know from watching Game of Thrones. Every week leaves us breathless in anticipation of what’s next to come. That’s the brilliance in the adaptation of George R. R. Martin’s series of A Song of Fire and Ice novels to the small screen. Keep an eye on TVHackR for more GoT related news, and enjoy the latest preview, below.