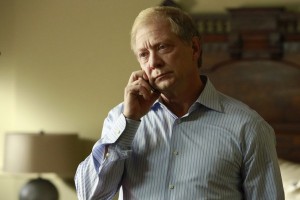 Cyrus and Mellie have always been at odds over Fitz’s attention on Scandal, particularly recently given his growing distance from each. Ever since the attempted assassination, he’s not been himself and has become much more paranoid of the people he surrounds himself with, which makes the President easier to manipulate. Cyrus and Mellie were already political sharks before the incident, but now that they see Fitz pulling away, they’ll do anything to keep themselves in his good graces, even if it comes to throwing one another under the bus in the process. However, will all the backroom dealing and carefully worded statements be worth it if Fitz doesn’t come around and let them back into his life?

Listed below are the dates, titles, and descriptions of the next two episodes of Scandal.

Thursday, March 21st – “Top of the Hour”
Olivia finds herself in the middle of a media storm, but this time she’s on the opposing side of the oval office when Fitz’s pick for Supreme Court Justice is caught in a torrid affair with Liv’s new client, high-powered CEO Sarah Stanner (Lisa Edelstein). Meanwhile, Olivia and Jake continue their flirtatious relationship, while Huck takes Quinn under his wing and Harrison and Abby try to figure out where they stand with their friendship. Back in the White House, Cyrus and Mellie continue to fight for Fitz’s attention, but someone else may already have it.

Thursday, March 28th – “Snake in the Garden”
The team find themselves working for the devil when Hollis Doyle’s daughter is kidnapped and held for ransom. Meanwhile, David is still in danger and is forced to seek shelter at Pope & Associates; Olivia and Jake take their flirtatious relationship to the next level even as the President continues to rely on Jake for intel; in the White House, Cyrus will stop at nothing to get back into the President’s good graces; and Mellie’s claws come out when she tells Fitz he needs to make some changes.

What changes will Mellie tell Fitz that he needs to make? How far will Olivia’s relationship with Jake go before she begins to figure out his real agenda? Will Harrison and Abby repair their friendship?