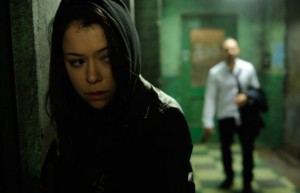 One night when Sarah was walking home from the train station, she sees a woman slowly disrobing before jumping in front of a train. Not only does she have the trauma of watching someone end their life, Sarah finds out that the woman who jumped looks exactly like her. It turns out that she and the woman (named Beth) are clones and Sarah has a major decision to make once she collects herself. She could either go into hiding due to the similarities in their appearance, hoping to escape any potentially bad reactions to someone seeing her, or she could take on Beth’s life to explore the conspiracy behind their birth. Either way, the Sarah that existed on the train is no longer.

The series premiere of Orphan Black finds Sarah sneaking into Beth’s apartment as a news report about the suicide comes on television. Desperate to find answers as to the cloning (i.e. how many of them are there, why were they made, who’s behind the whole thing), she decides to ditch her old life and turn herself into Beth, including changing her British accent to sound more American and cleaning up the makeup on her face for a more polished look. But how long will she be able to pose as Beth before anyone catches on to who she really is?

Orphan Black premieres Saturday, March 30th at 9:00 on BBC America. You can check out trailers for the sci-fi drama here and here, as well as the first scene of the first episode here.

Will you be watching Orphan Black? How will Sarah take to living Beth’s life? Can she fool even Beth’s most closest of family, friends, and colleagues?