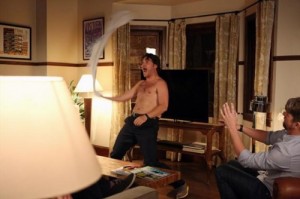 Even though Penny Hartz has been lucky in love for much of her life, it looks like her wedding to Pete might actually happen. The two balance one another out, with Pete keeping her grounded and Penny bringing him out of his shell, and barring the odd sleep text or random quirk, things are going well. However, once Happy Endings returns, Penny decides to reach out to her estranged father in hopes of rekindling their relationship and getting him to walk her down the aisle. Is she only setting herself up for disappointment or will Penny Hartz finally be able to depend on the first man in her life?

Listed below are the dates, titles, and descriptions of the next four episodes of Happy Endings, the first since January.

Friday, March 29th – “In the Heat of the Noche” (8:00)
Brad uses his skills, plus help from the gang, to prop up Chuckles and Huggs after the gym’s loopy owner, Terry (guest star David Alan Grier), tells him it may be closing. Meanwhile, Penny and Max try to break the habit of texting the men in their lives (Pete/the new guy Max is dating). They turn to NocheTussin, a black market cough medicine, to help them sleep when they’d normally be texting.

Friday, March 29th – “The Straight Dope” (8:30)
Max meets a cute girl who is a season tickets holder for the Bulls, leaving him no choice but to pretend to be straight, of course! Meanwhile, Alex is tired of everyone dismissing her as the dimwitted blonde, so she becomes well read to prove them wrong. However her newfound knowledge completely throws the whole group dynamic off and no one likes it.

Friday, April 5th – “The Incident” (8:00)
When Max tries out Jane and Alex’s long-time hairdresser, Krisjahn (guest star RuPaul), he gets some good salon gossip on the girls, but his loose lips may cause World War III between the Kerkovitch sisters. Meanwhile, the Steak Me Home truck is stolen and Dave and Penny try to figure out whodunit — but are perplexed by what they find when they finally locate the thief.

Friday, April 5th – “Bros Before Bros” (8:30)
With the wedding coming up, Penny decides to reach out to her estranged dad Roy (guest star Andy Richter). The reunion is sufficiently awkward but Alex encourages Penny to be optimistic, while Jane is more skeptical. Meanwhile, Dave enlists Brad and Max’s help in sabotaging “The Brazilian” food truck, a.k.a. Dave’s #1 nemesis, but Max accidentally falls for the enemy’s son and has to choose between his best friend or boyfriend.

Happy Endings returns from its two-month hiatus Friday, March 29th at 8:00 on ABC.