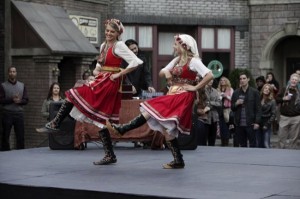 While Alex and Jane made up last week on Happy Endings, things might not be so peaceful for long once the third Kerkovich sister arrives in town. Previously only mentioned in passing, Brooke Kerkovich is the missing piece of the family, whose dynamic was explored earlier this season. Judging by the season three finale episode description, though, the reason she’s not involved in the lives of Alex and Jane is less about animosity toward her sisters and more about Jane not being able to handle someone even more of a perfectionist than she is. Will Brooke’s visit with her equally perfect fiance Eliot, who Brad can’t deal with, help or hurt her relationship with her sisters? Are the Kerkovich sisters bound for a reunion, provided Jane can get it together?

Listed below are the dates, times, titles, and descriptions for the final six episodes of this season of Happy Endings.

Friday, April 12th – “She Got Game Night” (8:00)
Brad and Jane host a couples game night with Penny, Pete, Max and Scotty and the competitiveness gets a little out of hand, prompting Penny to make an unexpected move. Meanwhile Dave has a big decision to make on the career front, and Alex tries to help but they end up at a psychic instead.

Friday, April 12th – “The Storm Before the Calm” (8:30)
Penny insists that she’s fine after her breakup with Pete, but the gang begin to wonder when she writes a play entitled “Black Plague: A Love Story” and asks Derrick (guest star Stephen Guarino) and his theater group to stage it. They brace for “drama” in more ways than one. Meanwhile a marketing group asks Alex and Max to be tastemakers, but is it a scam?

Friday, April 19th – “The Ballad of Lon Sarofsky” (8:00)
The gang is shocked when Penny rebounds from her breakup with Pete by having a torrid affair with the last man on earth they’d pick for her — the Car Czar (Rob Corddry). To make matters worse, she’s temporarily living with Brad and Jane, who end up acting like disapproving parents. Meanwhile the friends pressure Max to get a job so he’ll stop sponging off them. He decides to enter the “Mr. Gay Gay Chicago” pageant, with Alex and Dave as his coaches.

Friday, April 19th – “Un-sabotagable” (8:30)
Chase (guest star Mark-Paul Gosselaar), the ex-roommate whose life Max ruined, says he’d like to take revenge and do the same thing to Max, but Max’s life is so pathetic it’s “un-sabotagable.” Max vows to prove him wrong and asks Jane to help him get his act together. Meanwhile, Alex asks the rest of the gang for help when Dave challenges her to finally use her stockpile of Groupons.

Friday, April 26th – “Deuce Babylove 2: Electric Babydeuce” (8:00)
Penny’s mom, Dana, and Dave’s dad, Big Dave, are in town visiting, and these two lovebirds are not only going strong, they’ve decided to adopt a baby together, prompting Penny and Dave to react the only way they know how – irrationally. Meanwhile, Brad and Jane want some time just to themselves and decide to try to join an exclusive tennis club, but unfortunately Max is on the scent and they can’t shake him or Alex.

Friday, April 26th – “Brothas & Sisters” (8:30 – season finale)
The third Kerkovich sister, Brooke (guest star Stephanie March), is the alpha sister of the group, and Jane has the daunting task of planning a wedding for her more perfect and exquisite older sibling. Meanwhile, Brad is having a tough time himself dealing with Brooke’s equally more perfect African American fiance, Elliot (guest star James Lesure), and Alex and Dave have a big secret they’re hiding.