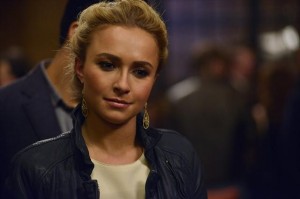 Nashville diva Juliette Barnes has the world at her feet. Young, beautiful, talented, and famous, she could do anything she wanted, be anything she wanted, and have any man she wanted accompany her on the wild ride that is her life. However, she has her eyes set on one man in particular – Dante, her mother Jolene’s sobriety coach. Is Juliette attracted to him due to, subconsciously at least, trying to sabotage her mother’s attempts at getting clean, which would help continue her resentment for Jolene? Or does Juliette see a secure, healthy, non-famous man in Dante, the type that could help her settle down and provide her with a sense of stability that she’s never had?

On the next episode of Nashville, while in bed together, Dante brings up the conflict of interest in being Juliette’s boyfriend/friend with benefits and Jolene’s sobriety coach. He suggests that he step down from working with Jolene, but Juliette doesn’t want that; as much as she still carries anger and hurt feelings for the way her mother raised her, she knows that Dante has been good for Jolene, especially since the slip-up at the number one party. For now, the two agree to keep their business private, but if Jolene comes on the road with her daughter, it’s only a matter of time before she finds out about Juliette moving in on Dante. Given the close quarters that they’d be sharing, no secret would be able to stay under wraps for long, which potentially puts Jolene’s sobriety and her relationship with Juliette in jeopardy.

Elsewhere on Nashville, Rayna has to leave the tour due to a personal crisis, while Deacon confronts Juliette about her recent behavior, Gunnar and Scarlett celebrate her success, and Avery lands a roadie job – with Juliette.

Will Jolene find out about Juliette and Dante’s relationship? What type of personal crisis will Rayna have to deal with? Is Will going to come between Gunnar and Scarlett?