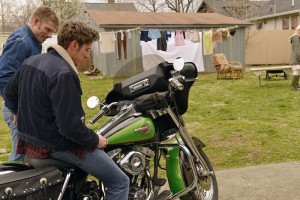 Ever since Gunnar’s brother was killed on Nashville, the singer-songwriter has been lost as to how to react, what to do with himself, and whether he even wants to do music anymore. He still shoulders the blame for the way things went down and has continued to internally (and subconsciously) punish himself for his perceived role in Jason’s murder, much to the consternation of Scarlett and anyone else that’s close to him. There’s nothing anybody can do to make Gunnar see that he’s not the one responsible for Jason being gone and that his brother wouldn’t want to see him so weighed down by guilt, especially since it’s interfering in aspects of his life (his relationship with Scarlett, his career) that he finds joy in. But will Gunnar find peace with what happened before this season of Nashville comes to a close?

Listed below are dates, titles, and descriptions for the next two episodes of Nashville.

Wednesday, May 8th – “Why Don’t You Love Me”
Rayna and Juliette are both nominated for CMA Awards and Edgehill Records hosts a party in their honor. Meanwhile Teddy worries about his relationship with Maddie, Juliette copes with new challenges, Scarlett is concerned about Gunnar, and tension grows between him and Will.

Wednesday, May 15th – “A Picture from Life’s Other Side”
Rayna finds an unlikely ally in Lamar when he sides with her against Teddy about the girls. Jolene sees Juliette struggling and tries to find a way to help. Avery and Will, separately, both get a chance to shine with bigger stars — but will it translate to career gold? And Tandy takes her own agenda to the board of Wyatt Industries.

Are Gunnar and Will going to be able to make it past the kissing incident? Will Juliette learn to ask for help now that her career and personal life have hit rough patches? Does Lamar have any ulterior motive in clinging so tightly to Rayna?