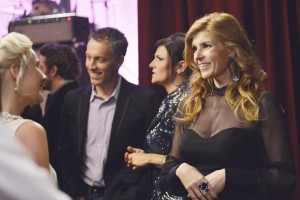 Reba McEntire. Dolly Parton. Loretta Lynn. All three of these women are country music royalty and have enjoyed successful careers, both critically and commercially, for decade upon decade, in addition to their ever-expanding empires and lucrative side ventures. When you ask a casual music fan to name female country singers, they’re usually some of the first names that pop up, due to the timelessness of their music, scope of their longevity, and influence on the country music industry as a whole. They all also happen to be CMA winners for Female Vocalist of the Year and on the next episode of Nashville, it looks like Juliette Barnes and Rayna James will be vying for the chance to have her name next to those of legendary performers like McEntire, Parton, and Lynn.

Already basking in the glow of her night with Deacon, Rayna completely forgot about the nominations and had to be reminded by Maddie, who called to break the news and try to get out of school to go dress shopping. Not even news that she’ll be competing once again with Juliette could bring Rayna down from the Cloud-9 she’s on right now, not when she’s finally able to be with the man she loves and has gotten recognized for excellency in her career field. Things haven’t been going well for Rayna lately, with Lamar’s heart attack, the divorce, and problems with Edgehill, but it’s all looking up for the country music superstar right now. Is it all too good to be true, though?

Elsewhere on Nashville, Teddy worries about his relationship with Maddie, Juliette copes with new challenges, and Scarlett is growing concerned about Gunnar, whose friendship with Will has gotten tenser following the attempted kiss.

Nashville airs tonight at 10:00 on ABC. You can check out a review of the most recent episode here, as well as spoilers for the next two episodes here.

Does Teddy have reason to worry about his ties to Maddie? How will Juliette handle herself following what happened with Dante? Will she or Rayna win the award for Female Vocalist of the Year?