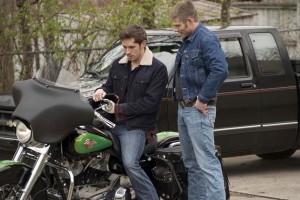 Gunnar and Will were getting a lot closer and it was so refreshing to see Gunnar lighten up a bit. He’s always singing ballads and mousy songs on stage, and when he saw Will really control his audience (of ladies, of course) he was in awe. A genuine friendship is really needed on Nashville and I thought this one might finally qualify. I suppose Will trying to plant a kiss on Gunnar stopped that budding friendship for the time being, but I’d like to think Gunnar is a little more forgiving than that.

Scarlett talked to Rayna about being hesitant to sign with her label without Gunnar, but seeing Gunnar play on his own he was more alive than he has ever been with her. Apart they are far more exciting and fascinating than they are together. They may want us to buy them as the next Rayna and Deacon, but they don’t have the sizzle. As boyfriend and girlfriend, fine, stay together, but as musicians, try being apart. See what happens. Maybe they’ll be surprised. Gunnar already got a demo out of the deal, seems like a great start. Gunnar told Scarlett that he never felt as good on stage as he did singing his own song. That’s a big deal. It’s time for them to be truthful with each other. If they remain so, they’ll make it.

Dante the Lothario was a complete embarrassment and Juliette’s infatuation with him cost her Deacon. Juliette was on such a decent path until he came along, and he reminds me of a boyfriend I had. A smooth talker. He can say exactly what the situation calls for and Juliettte questions her gut. That’s a bad guy to be around. Really bad. She was on her was to repairing her relationship with her mother, which had been the root of almost all of her emotional issues throughout her life, and she let Dante derail her.

It turned out he wanted total total control of a woman who was worth millions. That seems a lot like the guy I knew, too, except I didn’t have millions. When Dante planted those drugs on Jolene my heart broke for her. Thank God Juliette knew her mother well enough to know what drugs would kill her. Dante took Juliette for a ride, she got lost in man land, lost her band manager, almost lost her mother and lost almost a million dollars. For what?

Am I the only one who really likes Liam and didn’t disapprove of Rayna having a fling with him? The way he treated her when she broke was so sweet, and he hasn’t pushed. The tickets to St. Lucia were a bit much, but when you have money, I would expect those types of things really do happen. People do fly off on a moments notice to exotic places and it doesn’t mean anything other than – hey, let’s have fun in St. Lucia and have a break.

Deacon noticed Rayna’s chemistry with Liam on stage and then messed things up with Stacey, which is a shame, because I really liked her. Whether Deacon’s confession to Rayna that he’s still pining for her would change things eventually….was played out when Rayna changed her mind about going to St. Lucia and showed up at Deacon’s. His reaction was perfect and seeing them kiss was worth all the longing looks we’ve suffered through all season. Damn, they are hot together.

We still had to suffer through Nashville politics and the Teddy mess, but I don’t care enough to talk about it. If you do, hit the comments and tell me to touch on it next week.