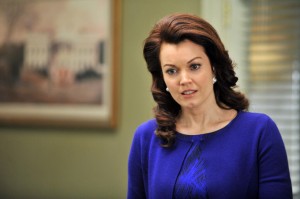 Of all the people on Scandal, Mellie Grant has the most power. She’s also the most dangerous because she knows of the enormity of her decision-making and how much Fitz relies on her to keep up the front of their home being happy. She’s not a First Lady content to play the background role anymore, so last week on Scandal, she made her move, using her anger at Fitz seeing Olivia to justify leaving him and hold the threat of exposure over his head. Mellie has made mention of wanting a political career after her husband’s administration ends and his actions have made that look like it could be happening sooner rather than later. In exposing Fitz’s misdeeds, Mellie would earn quite a bit of political capital that could be used for a run for office, while getting the ultimate revenge on a man who can’t seem to stay away from his mistress.

On the next episode of Scandal, Mellie has made her demands clear. She’s giving her husband 36 hours to convince her that he’s truly sorry for his actions and willing to rededicate himself to their relationship and children. The punishment if he fails to persuade her? She goes on national television and tells the world that the man she married is a “whore-loving bastard”, thereby dealing the final blow to the administration and Fitz’s reelection hopes. Nothing else can get her to back down, especially not Cyrus, so if Fitz wants to show that he can get elected without the help of a mysterious cabal, he’ll appear before his wife and do what needs to be done. But is the recent apathy he’s shown toward his career, fueled by the Defiance reveal, a sign that he won’t take this threat seriously?

Elsewhere on Scandal, Olivia’s safety is still compromised and Fitz sends Jake to protect her for the time being, while the team continues their investigation into the mole and makes a shocking discovery.

Is Mellie right for leaving Fitz over Olivia? If she exposed him on national television, would anything be able to stop her rise to power? Do you think that Cyrus is really the mole?