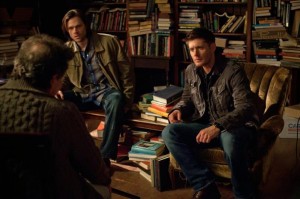 Happy happy joy joy!! My personal issues have abated somewhat so I get to lay it on the line again. The best thing in the world! A Supernatural  quotes post. With added exposition when needed. Why? Why not? I’m sorry you missed Sam and Dean last week, but I’ll make it up for you this week. They’re our boys, right?!

Sam: So, uh, um, Special K, you keep your nose to the Godstone. We’re gonna drive out and make a lot of noise a long way from here. Keep the safe boat safe for ya.

Dean: Want me to do the whole airplane thing, with the spoon? When’s the last time you ate?

Sam: Well, I’m not good. And I’m not going to be good until we can start moving again, until I can start the third trial.
Dean: Trial? I wouldn’t let you start a moped.

Sam: This isn’t a cold or a fever or whatever it is you’re supposed to feed. This is part of it all. Those first two trials they’re not just things I did. They’re doing something to me. They’re changing me, Dean.

Kevin: I’m dead you bastards! So screw you, screw God and screw everybody in between!

Sam: How about the other prophets in line? I mean, if Kevin is dead, then won’t one of them be activated?
Dean: Nothing. Not a peep. Here we are. No lead, no tablet. Squat.

Naomi: Very well. You’re saying that he can’t be caught? Then we will simply have to make him stop.

Dean: They taught word of God at Stanford?

Dean: And you say that this Medatron is hiding out in the mountains with a bunch of Indians.
Sam: Yeah, yeah I do. You’re not really supposed to say Indians. We should go.

Castiel: We were supposed to be their shepherds, not their murders.

Castiel: How many times have you torn into my head and washed it clean?
Naomi: Frankly, too damn many.

Crowley: Of course, if I wasn’t running everything, I could have played Dean myself.

Sam: Do you remember when Dad took us to the bottom of the Grand Canyon on that pack mule ride…
Dean: The what
Sam: And your, uh, mule kept farting, just letting go, like gale force?
Dean: Dude, you were only four years old. I barely remember that.
Sam: You rode a farty donkey.

Crowley: Just wanted to take a moment away from the main action to chat with my old business partner. I assume you won’t die just yet. It takes a painful long time to bleed out from the gun.

Sam: And I remember thinking, I could never go on a quest like that, because I’m not clean.
(This harkens to the rumors floating around that the trials are purifying Sam of the demon blood, and then he went AND SAID IT. How freaking awesome.)

Sam: You really haven’t heard of us? What kind of angel are you? We’re the freakin Winchesters!

Crowley: You little prat. You having fun yet?
Kevin: Screw you.
Crowley: Am I seeing this? How’d you figure it out?
Kevin: It started when they forgot the secret knock. Really, it was the way they acted. I don’t think on their best day Sam and Dean would go into town and get me a barbecue dinner; not when there are leftover burritos in the fridge.
Crowley: So, my demons were too polite.
Kevin: Yeah.
Crowley: I’ll be a son of a whore.

Metatron: I’m not one of them. I’m not an arch angel. I’m really run of the mill. I worked in the secretarial pool before God chose me to take down the word. Anyway, he seemed very worried about his work, what would happen when he left, so he had me write down instructions. He was gone.

Metatron: But really, really, it was your storytelling. That is the true flower of free will. At least, as you’ve mastered it so far. When you create stories, you become Gods. Of tiny, intricate dimensions into themselves. So many worlds. I have read as much as it’s possible for an angel to read and I haven’t caught up.

Dean: You want a story? Try Kevin Tran’s story. He was just a kid. He was a good, straight A kid and then he got sucked into all of this, this angel crap and then he became a prophet of the word of God. Your prophet! Now you should have been lookin’ out for him, but no, instead you’re here holed up reading books.

Metatron: You really intend on closing the doors of hell?
Dean: Seems like the thing to do, don’t it?
Metatron: It’s your choice. That’s what this has all been about. The choices your kind make. But you’re gonna have to weigh that choice. What will it take to do this and what will the world be like after it’s done.

That’s something I never thought about. If the doors of hell are closed, are they closed to those that need to go in as well as those that can get out? What Metatron said to consider seemed awfully ominous. We now know the third trial is to cure a demon. Who will they cure? Is Sam demon enough to cure? Only two episodes left, and I’ll be here to quote our way through it! 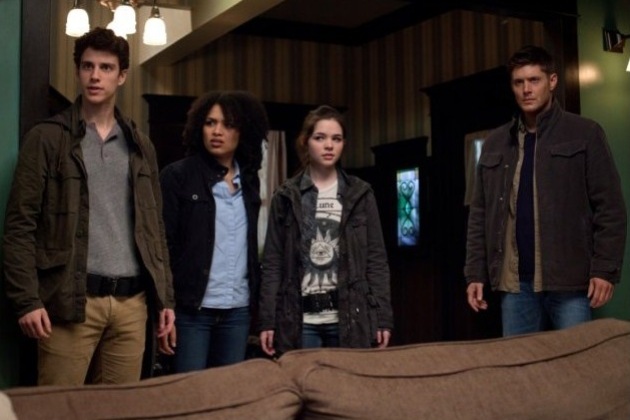