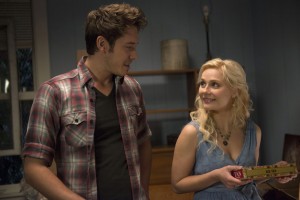 ABC and Big Machine Records have announced that a second Nashville soundtrack is set to be released on May 7th. The musical drama, which has sold nearly two million digital downloads since its October debut, has seen the likes of T Bone Burnett, Buddy Miller, Gabriel Witcher, Garth Fundis, Frank Liddell, Dan Auerbach and Ross Copperman lending their talents to make sure that the songs featured on the show (and on the soundtrack) are as authentic as possible. There’s been no confirmation as to who’ll be producing The Music of Nashville (Season 1, Volume 2) yet, though.

Most interestingly, this could mean that the show is on much more secure ground regarding its renewal status. It’s been reported that the show, the only ABC fall freshman drama still standing, was firmly planted on the bubble, considering that its live ratings are fairly meager for the attention that it gets. However, with a big DVR bump, awards attention, two soundtrack albums, countless tie-ins, and positive critical response, the show seems to have everything else going for it, meaning that a second season is more likely than not.

Will you be picking up the second Nashville soundtrack? Is the music the main attraction that the show has right now? Does the inclusion of a second soundtrack make renewal a foregone conclusion?

3. Gun for a Mouth
Performed by Sam Palladio
Written by David Poe

4. We Are Water
Performed by Hayden Panettiere
Written by Patty Griffin

5. Looking for a Place to Shine
Performed by Clare Bowen
Written by Natalie Hemby, Angela Lauer

6. Stronger Than Me
Performed by Connie Britton
Written by Sarah Buxton, Kate York

11. Nothing in This World Will Ever Break My Heart Again
Performed by Hayden Panettiere
Written by Sarah Buxton, Kate York