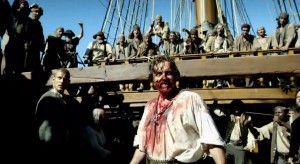 Starz has released a first look at Black Sails, its upcoming pirate drama from executive producer Michael Bay. Starring Toby Stephens (Die Another Day) as the infamous Captain Flint, the series takes place twenty years prior to Robert Louis Stevenson’s classic “Treasure Island” and finds fast-talking John Silver earning a spot among Flint’s rowdy crew. The pirates  fight for the survival of New Providence Island, the most notorious criminal haven of its day – a debauched, brutal paradise where  pirates, prostitutes, thieves and fortune seekers gather. Will they be able to save the island from being taken over and changed into a place where none of them belong?

While cable has expanded the depth and breadth of its subject matter in recent years, a pirate drama should be an interesting experiment, especially since it could be a barometer for international co-production Crossbones, slated to appear on NBC sometime next season. Dramas about crime, family, love, and scandal tend to be network bread and butter, utilized and modified time and time again, but pirates have very rarely been used as a framework for original scripted television. If Black Sails were to become a big hit for Starz, NBC might be able to breathe easier and talk itself into taking more dramatic risks; if Black Sails flounders, though, the peacock could get cold feet and potentially bury their pirate drama in no man’s land on their schedule.

Black Sails premieres in early 2014 on Starz, likely taking over the January slot that Spartacus vacated after its recent series finale.

Does the first trailer make Black Sails seem promising? Can you see the show airing alongside the likes of Magic City and Da Vinci’s Demons on Starz? Is a pirate drama a risky move?