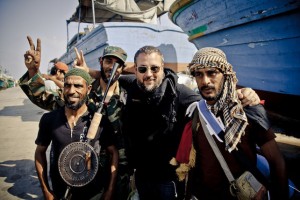 HBO has extended newsmagazine VICE from a planned eight episodes to ten, with the June 14th season finale set to focus on the show’s trip to North Korea. Series host Shane Smith, previously barred from entering the country, sent sent a team of correspondents and a production crew, including VICE correspondent Ryan Duffy, NBA Hall of Famer and Chicago Bulls great Dennis Rodman, and three players from the Harlem Globetrotters, on a cultural exchange to the basketball-crazed country in late February.

Viewership for the second edition of VICE, which debuted Friday, April 12, improved 78% over its premiere, attracting 931,000 viewers at 11:00 p.m. Based on preliminary data, the series has already achieved an average per episode gross audience of two million viewers.

-After recently premiering its first original scripted drama in Rogue, starring Thandie Newton, DirecTV has set its sights on adding another drama in Full Circle. From screenwriter Neil LaBute, the series examines the human condition and relationships through a series of conversations between 11 people whose lives, unbeknownst to them, are intertwined. Described as “a modern day La Ronde meets My Dinner with Andre“, production on Full Circle begins in early summer for a fall premiere.

-According to a blog post on The Animation Guild, FOX’s The Cleveland Show has been canceled after four seasons. However, there’s been no official confirmation, nor will there likely be one until FOX reveals its fall schedule next month.

-Comedian Tracy Morgan is set to host the 2013 Billboard Music Awards, airing May 19th on ABC, while Road Rules alum Theo Von has been named host of upcoming TBS hidden-camera comedy Deal with It, premiering July 16th at 10:00.

-Fresh off the record-setting performance of Defiance, Syfy has unveiled the first teaser trailer for Helix, executive produced by Battlestar Galactica‘s Ron D. Moore. The show, yet to be cast, centers on a team of scientists investigating a possible disease outbreak in an Arctic research facility who find themselves trying to protect the world from annihilation.