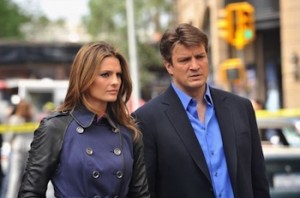 There was a lot to digest in Monday’s episode of Castle. The case of the week was shrouded in so much mystery my head was spinning. This was the kind of case where I actually welcomed Castle’s crazy theories. His idea of a drone army may have been a little too far fetched though.

From the beginning, I didn’t know what to make of “The Human Factor.” I asked myself, “what is going on?” at least 5 times and it wasn’t even 10:30 yet. I love when Castle has cases like that. I love not knowing what is going on. It keeps me intrigued. Just when you thought Dale Tanner might have been murdered because of what he was exposing, it ends up being your typical human factor. Dale’s son was the one who killed his father. He wanted to make Dale pay for all the heartbreak he caused. I can’t say I blamed the kid, Dale might have been exposing nasty things, but he really wasn’t there for his family. Murder is really no way of solving anything though.

I liked the case of the week, but I’m really happy we got some lighthearted funny moments to balance everything out. I loved Castle playing with his remote control tank with the camera on it and spying on Beckett while she was getting dressed. Anytime we get a Castle and Beckett scene in bed, it just puts a smile on my face. Beckett faking a rise of the machines scenario to mess with Castle was hilarious. I could not stop laughing, it was too cute. I also could not stop laughing when Castle and Beckett went into that bookstore and saw that Storm Season was on the clearance table. It’s moments like these that really makes an episode for me. Without these, you just have your typical boring procedural show without any heart.

We also got bad ass Beckett this episode, which is always a good thing. Stack was right, Beckett is a force to be reckoned with. When I heard him say that, I immediately flashed back to Beckett smashing Senator Bracken in the face. That moment was one of my favourite bad ass Beckett moments ever. Even though I stayed spoiler free for this episode, I just knew something was coming up. The moment Stack asked to speak to Beckett I got a strange feeling in the pit of my stomach. Here was the moment I did not want to happen. Stack asked the preverbal question, “Where do you see yourself 5 years from now?” Stack sees bigger things for Beckett and truth be told I do too. But in D.C.? Working with the Attorney General? Could Beckett really go for this job interview? If you haven’t seen the promo for next weeks season finale, do not read the next sentence. According to the promo, Beckett went to the job interview and is on the short list.

To be perfectly honest, it really bothered me that Beckett didn’t tell Castle what Stack said to her regarding the job. Beckett said it’s nothing but I seriously doubt it’s nothing, especially to Beckett. Castle and Beckett are in this together. They’re in love, they’re partners. I realize that “The Squab and the Quail” was supposed to air before “The Human Factor” and there’s maybe still some unresolved issues between Castle and Beckett. Maybe this is a sign that Kate is still unsure where she stands with Rick in regards to their future together. I know the show probably wants to build suspense, but Kate not saying anything to Castle is really telling. I wouldn’t blame Beckett one bit if she wanted to move on from the 12th. I believe she’s meant for much bigger things. I just hope Castle factors into her plans. I can’t believe I’m saying this, but for the first time in quite a while, I’m scared for Castle and Beckett’s future. I know last season we got a super happy ending with Castle and Beckett finally getting together. Are we going to be lucky and get another happy ending?

As if the end scene didn’t hurt my heart enough, we got this speech from Castle that was quite parallel on what was going on.

“‘Cause with people, all decisions are personal and where one person might see roses, another may see a chance to move on from an old life and on to a new one.”

I already see the finale being the death of me. I honestly hope everything works out and we’re not left with this super cliffhanger involving Castle and Beckett’s relationship. It will in fact be the longest summer ever.

So, does anyone have any theories about the finale? Are we going to get heartbreak or a happy ending? In Marlowe we trust…right?