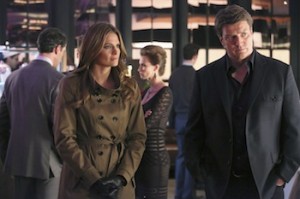 I thought I would be able to handle “The Squab and the Quail” but it’s 2 days later and I’m still consumed by it. My feelings are jumbled in a big knot. How I can let one show affect me like that is crazy. I was on such an emotional roller coaster throughout the whole entire episode, and at the end I was left with my mouth hanging down yelling, “ARE YOU FREAKING KIDDING ME?” You know what? I absolutely loved every second of it. I need to tip my hat to Jason Wilborn and my friend Sarah’s friend Adam Frost who came up with the story. I am just blown away by the quality of this show week after week.

This episode will always hold a special place in my heart because my friends and I were on location one of the days they were filming. I thought it was so cool that I saw many of the extras multiple times that day walking up and down the street and to then see them on screen was just incredible. It’s experiences like that, that really heighten your love for a show. To see how hard the cast and crew works to put out an episode makes you appreciate them even more.

Beckett had to protect billionaire hottie Eric Vaughn because his life was in danger. Castle was so jealous of Vaughn it was quite amusing. This also brought out a little nutty case solving Castle. At one point he was quite high off caffeine. After Castle pretty much chose a video game over Kate, it was good to see someone show an interest in her. Maybe shake Castle up a bit. (Seriously Castle? You were ignoring Kate while she was trying to seduce you. Are you crazy man?) I thought the whole Castle taking Kate for granted storyline was quite realistic. It has been a year since they first got together. They still haven’t had “the talk” so this isn’t so out of left field.  I had to chuckle at Castle noticing Kate swooning over Eric Vaughn. Why wouldn’t she? He’s gorgeous, rich, and I’m pretty sure he wouldn’t choose a video game over her. I was even swooning over him! Damn that smile and accent. And ladies, I saw him while on location… really gorgeous in person.

We all know Kate Beckett would never cheat on Castle, but the moment after Vaughn hit himself in the eye with the cork from the champagne was a little too close for comfort for me. Maybe Kate was feeling like Castle wasn’t appreciating her and here’s this amazing billionaire obviously interested in her. It actually hurt me a little when Beckett hesitated when asked by Vaughn if her and Castle were serious. I’ve analyzed this “almost” kiss more times then I’d like to admit and you can disagree with me if you want, but Beckett totally let Vaughn come in for a kiss then she pushed him away. Good thing she did because someone shot at Vaughn through the window.

I loved Castle running into the hotel room to see if Beckett was okay after the assassination attempt on Vaughn. Despite Castle being a dope sometimes, he loves Kate and would do anything for her, so my heart totally sank at the sight of Castle’s face when he saw the champagne bottle. I know a lot of people are saying Kate told Castle the truth about the kiss, but it was only after Castle was prodding her story that she told him the truth. I don’t think she was going to lie to him, but she didn’t tell him the truth right off the bat.

I have to say, I really enjoyed the case of the week. I loved how both story lines were intertwined. Just when you thought Mr. Fantastic wasn’t so fantastic, we got a nice little twist. Vaughn’s attorney ended up being the one trying to kill Vaughn. I really did think Vaughn was behind the attempt on his own life. It would have been too easy though. It would make the audience be justified in hating this guy hitting on Beckett if he were the bad guy.

Now to the nitty gritty. That ending! I was absolutely done after that scene. I didn’t like that facial expression Kate made and the change in music. It made me so nervous. You could see the doubts building. In my heart, Kate has loved Castle a lot longer than she has even admitted to herself. Even though she hasn’t said the words, every one knows she loves Castle. Then you  have this handsome billionaire who has expressed interest in her, and on the other hand you have Castle who obviously loves her but could chose a video game over her. They’ve never had the “where are we going?” conversation. I could see why Kate was conflicted. I’m just really happy she didn’t let Vaughn kiss her. It could have been real easy to kiss him. That would have just caused more harm than good. I just hate that she said her and Castle’s relationship is complicated. That statement hurt my heart. Of course Mr. Fantastic came back with:

“Kate, there’s nothing complicated about meeting a woman like you and knowing what to do.”

All I’ve got to say is Castle better step up his game. I welcome angst, and in this situation it was totally warranted. Nothing is perfect. No relationship is perfect. It’s real. This is what real couples go through. Castle and Beckett are just going to come out of this even stronger. While I understand Kate’s side of this, there’s Castle’s side also. He’s had 2 failed marriages. He has his walls that he’s put up. He’s with this woman whom he loves undeniably and doesn’t want to screw it up. As my genius friend said, it’s easy for an outsider to come in and say it’s simple. Vaughn doesn’t know Castle and Beckett’s history. As a matter of fact, this was less about Vaughn and more about Castle/Beckett. Vaughn was just a tool to facilitate them having these conversations going forward. Obviously Castle is it for Kate. Kate just needs to know Castle is in it with her.

“My mother loves your novels.” Eric to Castle

“He’s not you.” Kate to Castle

“And unlike you, his helicopter doesn’t need a remote control.” Javier to Castle

Lanie with a fake British accent

“Beckett is over the moon for you.” – Alexis to Castle

Moment that drove me nuts

Vaughn: “You know that’s an extraordinary woman you have there.”