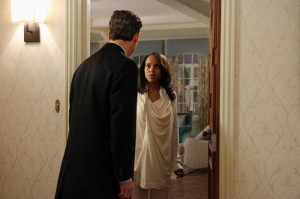 Fitz made the choice last week on Scandal to watch the clock run out on his relationship with Mellie and quite possibly his time in the White House. Rather than give in to the demands of his wife and live out the rest of his term a shell of himself, the President opted to follow his heart and prove to Olivia that he wanted to be with her and legitimacy is within reach for their relationship. It was a bold move that, while a grand romantic gesture that got Olivia closer to forgiving him, has brought a storm cloud of controversy to the White House, meaning that it’s time for Cyrus to try and work his magic to see if he can save the administration.

On the next episode of Scandal, Cyrus is trying to convince Fitz to go back to Mellie and save the White House. He doesn’t care if the President remains faithful or treats Mellie with any amount of respect behind closed doors (heck, he even offers to clean Olivia’s lipstick from Fitz’s collar and whisk her in and out of the motorcade); he merely wants the man he helped get elected to not ruin his place in history by trying to impress his mistress. However, after a lifetime of doing what other people want him to do and letting decisions be made for him, Fitz seems to be sticking by his choice this time. He loves Olivia and this time, he’s going to get the quiet, normal life that he so desperately craves – or die trying.

Elsewhere on Scandal, the other gladiators inform Olivia of the latest developments in the hunt for the mole. While she’s relieved for it not to be Cyrus, there’s still the fact that someone else knows about the election rigging to be dealt with.

Who do you think is the mole on Scandal? (My money is on VP Langston, but this is a show that goes anywhere and does anything, so it could very well be Zombie!Amanda Tanner, for all I know.) Did Fitz make the right decision in essentially giving up his political career in order to go legitimate with Olivia? Just how much fallout will the White House have to deal with as a result of Fitz’s actions (or, well, inaction)?