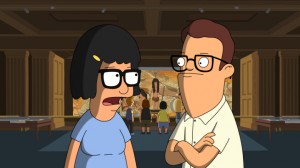 It’s the day of the school annual museum field trip and for the first time in eight years, Linda’s not volunteering. Instead, that honor’s going to Bob, even though he doesn’t have good memories of field trips; the one time he went to the museum, he ditched to smoke cigarettes by the zebras with Warren Fitzgerald. However, Gene’s excited about the Sands from Exotic Lands exhibit and Bob wants to pull through for his children, so as much as he may dislike Mr. Frond, he’ll be the lone parent for the day.

While Frond hurredly changes his pairings to have Andy and Ollie together, lest they throw another tantrum, Gene is going on a boobie bender with Zeek, Louise was put with regular-sized Rudy, and Tina is buddies with Henry, who she considers to be the weirdest kid in school. However, he considers Tina to be the dorkiest kid in school and they both approach the pairing with the intent to increase the other’s cool factor so they’re not an embarrassment to be seen with.

On the bus ride there, Tina tries to talk to Henry about his interests, which include graphic novels, only to become frustrated at his lack of coolness, while Louise takes a liking to Rudy and his cymbals, which she uses to punctuate a joke. Being that there’s a strike of museum workers going on right now, the museum is only working at 1/8 capacity, thereby closing the noted Amazon room and frustrating an already irritated Louise (who hates field trips, any and all) beyond belief. She convinces Rudy to sneak off from the crowd with her and into the exhibit, full of tree, plants, and dirt like that found in the Amazon; he ditches his backpack and the two go looking for a way to climb the ropes and touch everything.

At head count, Bob notices that Louise is missing and heads into the Amazon room himself where he finds Louise and Rudy hiding in the plants. She gets him to let them look around a little more, all the while Tina is extolling the virtues of horses to Henry and Zeek is breaking out the boobie checklist from his cousin, which includes a linear list of the boobs they’d be encountering at the museum. Back in the Amazon room, Bob lets Louise and Rudy go on a stilted hut and lets himself be talked into climbing to the top of the room by Louise, who calls him soft and brings up his own field trip rebellion as evidence that he should let them do what they want.

He pushes over one of the display trees and gets the kids to climb up it, which aggravates Rudy’s asthma. Bob reaches the top with Louise and she lets it slip that her future includes running the restaurant while he’s in a nursing home, surprising him and making him needle her about being her hero and looking up to him. However, they have to turn their attention to Rudy, especially once a security guard moves the tree back to where it belonged. There’s no way for them to get down and Rudy has to have an inhaler, which he kept in his backpack, every two hours or he’ll die. Bob uses his neon yellow volunteer vest to slide down a nearby rope, landing on the ground below. He moves the tree back and gets Louise and Rudy down, drawing the attention of the security guards and making them have to run for the bus.

While this is going on, Tina and Henry are having a dork-off and going around to see who their classmates consider to be dorkier. Unfortunately, they end up tied and acknowledge that maybe they’re both dorks and that’s okay. Other people in the final room admit to what they’re dorks for (including dancing, sand, boobs, their siblings, and cheap chardonnay) and the class heads to the bus, where Bob sits with Louise. Rudy may be hungry for more life after tasting quite the adventure that day, but Louise might have been the one to put herself out there more, as she takes the name “Louise’s Burgers” into consideration for when she runs the restaurant and calls Bob “Daddy” like she used to do.

Chanting for Dummies
Linda might have thought that she’d enjoy the time off from being a volunteer, but it only makes her feel unneeded by her kids. Teddy talks her into going down to the museum anyway and closing the restaurant for the day, which she agrees with; before she can go into the museum, though, she runs into the picketers, a sad bunch of workers who aren’t exactly selling their rage, anguish, and demands for change. When they mention that they need her, she tries to help them revamp their chanting with talk of burning artifacts and pooping on fossils, only to get way too involved in the chanting and make it all about her.

Soon, the chants go from rousing museum-related demands and sayings to gibberish and talk of dropping pants, causing the workers to band together and kick her out of their picketing. She runs into Bob, Louise, and Rudy bolting for the bus before heading back home to wait for her family.

Additional thoughts and observations:
-“With great vest comes great responsibility.”
-“I can only blow it if you hold it!”
-“You remind me of my mom. She hates fun, too.”
-“I’ve never heard of anyone having a boob fetish.”
-“Your skin should be its own exhibit.”
-“We’re finally done with boobs!”
-“Oh, I hate you. But I love air.”
-Among the boobs that Zeek wanted to see were Viking and Eskimo. He also sees boobs in camel humps, mountains, and speed bumps, in addition to ruining Gene’s sand by pointing out that he unknowingly made boobs with his hands.
-Tina’s awkwardness will never not be great to me. I also kind of wanted her and Henry to fall in love over their dorkiness? I don’t know.
-Tina’s idea the title of her new erotic fan fiction: Ro-butts.
-Rudy was oddly sweet to me, for some reason. I’m glad that he got to chase a thrill for the afternoon, even though it nearly killed him in the process.
-Next week on Bob’s Burgers: On the third season finale, Gene is off to baseball camp, while Tina becomes a caffeine addict.