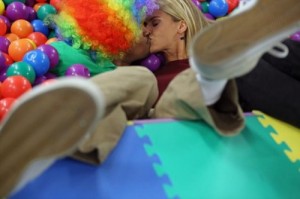 Thus far,2013 has decidedly not been the Year of Penny. Or, for that matter, the Year of Happy Endings.

ABC announced that it will be moving Happy Endings to Friday nights for the remainder of the season. The show, which last aired an original episode January 29th, assumes the time slots vacated by Last Man Standing and Malibu Country on March 29th, as both will have aired their season finales by that point. There are 10 episodes remaining in the third season of the critically loved, little watched ensemble comedy, meaning there will be five weeks of doubled-up new episodes that culminate in a season (series?) finale on April 26th.

Replacing Happy Endings on Tuesday nights will be Celebrity Wife Swap; featuring two celebrities swapping lives to see how the other lives, the show will premiere Tuesday, February 26th at 8:00, bumping The Taste to 9:00. Body of Proof will remain in the 10:00 slot for its 13-episode third season, which will get a boost once Dancing with the Stars returns in March.

The third season of Happy Endings has seen a series of obstacles that have come between it and ratings success. Not having premiered until late October, the show ran into a logjam of like-minded niche comedies fighting for the same audience, resulting in none of them doing particularly well. An experimental airing on Sundays was purported to be about helping the comedy get sampled, but when ratings didn’t improve, it was cut and kept strictly on Tuesdays. The cancellation of nightmate Don’t Trust the B—- in Apt. 23 allowed Happy Endings to double up on new episodes, but thanks to big numbers for The Bachelor on Tuesdays and the State of the Union address, it only got the chance to do this one time before being yanked.

And now it’s on Friday nights and will have to deal with a two-month hiatus. While the show will get to air all 23 episodes in its current season order, the slim chances for survival have been diminished by the move. You could argue that cult shows have managed to keep afloat on Fridays, but those tend to be genre shows (i.e. Fringe) and not comedies. The only things that could potentially help Happy Endings reach a fourth season, then, are syndication (which it’ll be about 30 episodes away from by May) and poor comedy development from ABC.

Will you be following Happy Endings to Friday nights? Do you think that the show will be able to survive on Fridays or will its already small audience collapse as a result?