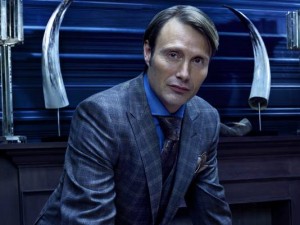 Agent Will Graham is one of the leading criminal profilers in the country, a veritable encyclopedia of information on what makes  a serial killer tick. Combine that knowledge with an unusual ability to empathize with those he’s hunting and his mind is a powerful weapon for the FBI to use in bringing killers to justice. However, even his advanced way of looking at crime and all who commit it doesn’t prepare him to work with Dr. Hannibal Lecter, famed forensic psychiatrist…and cannibalistic serial killer. Only Agent Graham doesn’t know that the man he’s formed an impressive partnership with is perhaps the most dangerous and cunning killer he’s ever came across. How long will he be in the dark to what exactly Dr. Lecter is capable of? Will Agent Graham find himself up to playing mind games with a mind as brilliant as his own?

Based on the series of novels from Thomas Harris, Hannibal was developed by Bryan Fuller (Dead Like Me, Pushing Daisies) and will feature 13 episodes in its first season. The show received a series order without going to pilot and will be occupying the Thursdays at 10:00 slot, a former place of prestige that has seen dramas like Awake, The Firm, Prime Suspect, and Do No Harm fail to draw an audience. With the recent success of The Following, will Hannibal manage to curb the Thursday night curse and find an audience for itself?

The series premiere of Hannibal airs Thursday, April 4th at 10:00 on NBC.

Will you be watching Hannibal? How do you think the show will compare to the novels and movies about Dr. Lecter? Does the show stand a chance at getting a renewal in May?