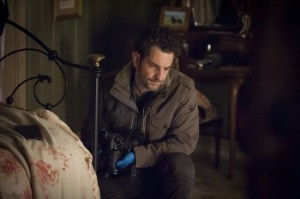 NBC has announced that Bryan Fuller’s Hannibal will be returning for a 13-episode second season, slated to air no earlier than midseason. The series, starring Mads Mikkelsen (Casino Royale) as serial killer Dr. Hannibal Lecter, was one of the few awaiting word of its fate following this month’s upfront presentations. Upon its debut, the drama earned rave reviews for its stylish yet gritty reimagination of the infamous literay/cinematic character, whose growing relationship with Will Graham (Hugh Dancy) has been one of the main features that’s attracted critical attention.

Hannibal is the youngest-skewing drama on ABC, CBS, and NBC, with a median age of 45.7, and attracts a more affluent audience than average, two big reasons why the show is returning in 2013-2014. Couple that with 75% growth in Live + Same Day ratings and the show, while not attracting a strong live audience, is a major win for NBC. Given the show’s cheaper licensing fee and genre-bent, it seems destined to air on Fridays at 10:00 alongside Grimm, seeing as how other international co-productions (Dracula, Crossbones) are already penciled in for the same slot. Moving Hannibal there would remove the ratings pressure that the Thursday slot brought, pair it with a similar lead-in that it could feed off of, and allow it to accumulate episodes and soak up more critical attention. Additionally, its presence keeps NBC’s drama presence strong and gives them the opportunity to focus on other hours of their schedule, the latter being more evident should Hannibal make the move to Fridays.

Hannibal airs Thursdays at 10:00 on NBC, with the season finale airing June 20th. You can check out NBC’s 2013 fall schedule here.

Where do you think Hannibal will be scheduled for its next season? Was the show a surprise for you, in terms of quality and how it managed to interpret the well-worn tale of Hannibal Lecter? Should NBC continue down the path of inexpensive international co-productions to fill schedule holes and garner acclaim?