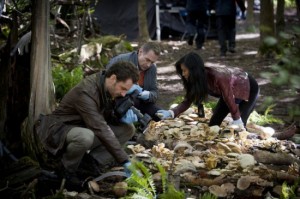 “Therapy doesn’t work on me.” When you think about Will saying that and how he will one day regret how such a little comment got him so close to the criminal mastermind and eater of flesh Hannibal Lector. I had to laugh when Lector told Jack he’d love to have him and his wife for dinner one night. Every little sentence that is uttered seems to be a double entendre, especially when the crime of the week consisted of a murderer who abducted diabetics, put them into comas to get their sugar dosages just right so they would adequately feed his mushroom garden. A mushroom garden that was people, turned to fungi yet being fed. Some alive, some dead, as a man kept them in that semi-death suspended state awaiting the inevitable. It was rather vomit inducing.

Freddie Lounds, in a land she can only find in her nightmares, has started treading in the world of Hannibal and Will by posting Will’s story as a demented mind doing research on other demented minds. Funny thing is she’s just as demented as the rest of them. Climbing around crime scenes and finding clues, leaving behind evidence of her own that can only place her into compromising locations, making neither Lector nor Will Graham happy men – let alone the Feds. If she was as concerned about Will as she wrote she was, she’d be a bit more careful.

Will’s guilty conscience about saving Abagail Hobbs by killing her father has been eating him alive. He’s seeing her bather everywhere and sees living evidence of may other dead crime victims he comes across on a daily basis. It makes him feel just crazy enough to want to continue his relationship with the only man who is actually more crazy than he is – Hannibal Lector.

When Will shot the Mushroom Man, he told Will they all evolve from the same state. That by burying them and walking through a field they know they are there. If he had let Will bury Abagail Hobbs in a field she would finally have been able to reach back to Will like he wanted. These are some messed up stories from the mind of Bryan Fuller and Thomas Harris.

What’s interesting about it is between the two of them they can read each other better than any other person could every hope to. Hannibal says it’s beautiful in its own way, giving voice to things that matter. Did Will really feel so bad because killing Hobbs felt so good? Will realizes that killing Hobbs felt just, but shooting the Mushroom Man felt good, too. Graham admits it, but can’t truly accept it. He doesn’t want to equate killing or shooting the bad guys with being powerful, no matter how it feels in his mind.