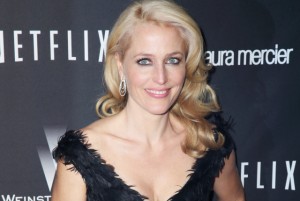 TVLine is reporting that Gillian Anderson has been promoted to a series regular for the third season of Hannibal after Bedelia du Maurier, the psychologist she portrays on the drama, was a recurring character for two seasons.

“The cast and crew of Hannibal are positively giddy to be welcoming Gillian to Season 3 as a series regular,” Hannibal creator Bryan Fuller told TVLine in an exclusive statement. “A striking presence on stage and screen, she brings wit, grace and intelligence to every role she embodies. Screenwriting is so much easier when you’re inspired by a great actor and Gillian has filled the Hannibal writers room with wonderful inspiration. I can’t wait for audiences to see her make a bigger meal out of the Cannibal than ever before.”

In addition to her role on the acclaimed NBC drama, Anderson has appeared on the likes of The X-Files, Crisis, and The Fall. Even with her promotion to a series regular on Hannibal, Anderson is still scheduled to head the second season of The Fall, where she plays a detective looking into a serial killer.

The third season of Hannibal will premiere sometime midseason on NBC.

Will you be watching the third season of Hannibal? Are you excited to have Bedelia playing a more prominent role in the show than she did in seasons one and two? What else would you like to see from season three, either in terms of character or plot?