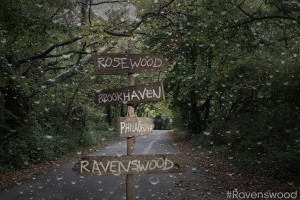 Yes, I know you’ve all heard the news by now. ABC Family has greenlit an even bigger secret than the identity of A on Pretty Little Liars. A straight to series spinoff that will premiere in October after the Halloween episode (an annual special y’all) of Pretty Little Liars. they’re giving us no information on the show whatsoever but this:

“Not far from Rosewood, Pennsylvania, a deadly curse has plagued the citizens of a town called Ravenswood for generations, and the curse is about to strike again. Five strangers suddenly find themselves at the mercy of this fatal curse, so they dig into the town’s mysterious and terrible history before it’s too late for all of them.”

And, a website where they say they’ll take all the clues they’re dropping all over the internet on places like Facebook, Tumbler, Twitter and in between your toes so you don’t have to look too  hard to find what you’re searching for – more information about this new show! The link is here RAVENSWOOD.

We know Marlene King will be involved, that it’s an Alloy Entertainment production, and that Ms. King will be joined by Oliver Goldstick, Joseph Dougherty, Leslie Morgenstein. It’s assumed the strangers who will stumble into Ravenswood will be introduced on the aforementioned Halloween special.

Pretty Little Liars generally breaks all kinds of records with viewers, especially teens and young women, right up to those at the ripe old age of 49. It’s s social media monster and given that information alone, it’s no surprise Ravenswood went straight to series.

If you know me at all, I’m not all about statistics and the marketplace, but speculation. What the hell will this show be about? What’s currently missing from ABC Family, and what does the title of the show and it’s appearance in conjunction with Halloween mean to me? I’m betting on a supernatural element. Any takers?

Consider me officially worried about the futures of The Lying Game  and Bunheads, the former more than the latter, which is really just my personal bias. I was so engrossed in the storyline of Emma and Sutton and from what I understand April is the deadline to make a decision about the future of both series. May the force (of the audience – get out there and make your voices known if you love ’em) be with them

Stick with us, kids, as we’ll bring you all the news we learn as we learn it, and more speculation, too, because that’s half the fun of television. Predicting (and usually not) the future. Game on!