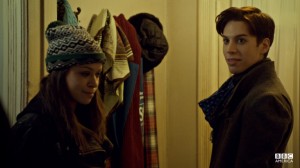 Alison has always been the weakest link in the hunt for the truth about where the clones came from on Orphan Black. While she may be tough and responsible for the fund that will likely come into play later, she’s only gotten more paranoid as the weeks have gone by and that can be dangerous in a situation like this. A little caution is certainly a good thing to exercise, particularly when it means life or death, but Alison’s unwillingness to trust and constant second guessing have only hurt her progress toward the truth. With her paranoia seeping into her home life with Donnie and the kids, she’s going have to either strike out on her own, leaving everything she knew and loved behind, or make herself let go and lean on someone else for once.

On the next episode of Orphan Black, Alison’s nanny cam has turned up some interesting results, as Donnie woke up in the middle of the night to do something. Unfortunately, the tape ends before she could get a hint as to what he actually did, but the way he stood over the bed suggests that it had to do with Alison and his (as yet unconfirmed) role as monitor. She tries to confront him about it, only to grab a golf club and hit him over the head, knocking him out cold. Alison is supposed to be the steady one on Orphan Black, the one that Sarah is able to turn to in times of crisis, but it looks like their roles have reversed and Alison will need the help of the one she once looked down upon.

Elsewhere on Orphan Black, Sarah has to make tough decisions about who to trust, while Paul has figured out who the woman posing as his girlfriend Beth is. Will this lead to Sarah learning of his role in the conspiracy, if he even has one?

Orphan Black airs Saturdays at 9:00 on BBC America. The show has already been renewed for a second season, set to premiere in 2014 as a part of Supernatural Saturdays.

Is Alison right about Donnie playing a role in the conspiracy? If she’s not right, did her actions in the sneak peek put her in danger? How will Paul react to finding out about Sarah?