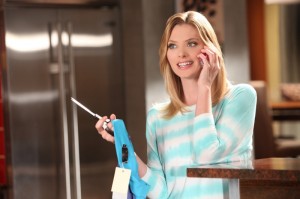 This week on TVHackr, we talked about a Castle casting, more chances to watch Sleepy Hollow, and a return of sorts for Dexter, while the internet touched on Netflix, reboots, and accents.

FOX Picks Dads Up for a Full Season
FOX has ordered a back nine for Dads, meaning that its entire Tuesday comedy lineup (Brooklyn Nine-Nine, New Girl, The Mindy Project) will have full seasons.

Witches of East End 1.04 “A Few Good Talismen” Recap
While Wendy beds a handsome entomologist in order to procure spell ingredients, Joanna has another encounter with the shifter and Freya gets closer to Dash’s mother Penelope.

Lifetime Renews Drop Dead Diva
Lifetime has renewed Drop Dead Diva for a sixth season after bringing it back from cancellation before the start of season five.

Ellen DeGeneres Developing Comedy for NBC
Daytime Emmy winner Ellen DeGeneres has a comedy in development at NBC which will focus on a lesbian who becomes pregnant with her straight male friend’s baby.

FOX Makes Every Episode of Sleepy Hollow Available Online and On Demand
In anticipation for the November 4th return of Sleepy Hollow, FOX has made every episode available to watch online and on demand.

The Full Series of Dexter Coming to Netflix
Years after taking the serial killer drama off the streaming service, CBS has made a deal with Netflix for the entire series of Dexter to stream, with the first four seasons appearing on Halloween.

Castle Review: “Get a Clue”
When a murder occurs where the body of the victim is kept in a crucifixion position, Castle and Beckett disagree on what the medieval symbols on the victim’s hand could mean.

Almost Human: Watch the First 8 Minutes of the Series Premiere
FOX has made the first eight minutes of the series premiere of sci-fi cop drama Almost Human available in advance of its November 17th premiere.

The Walking Dead Renewed for Season 5 by AMC
AMC has renewed The Walking Dead for a fifth season after the show began its fourth season with record-breaking ratings for its season premiere.

Ravenswood Review: “Death and the Maiden”
On the second episode of Ravenswood, Miranda’s fate is revealed, Luke suspects his mother is cheating on his father, and Olivia is crowned homecoming queen.

Scandal 3.05 Sneak Peek: Mellie and Cyrus Go on the Hunt for a Campaign Manager
On this week’s episode of Scandal, Mellie and Cyrus start their search for a manager for Fitz’s reelection campaign.

Betrayal 1.06 Preview: Drew’s Obsession Grows
Next time on Betrayal, Drew’s obsession with figuring out what his wife is up to grows and Jack makes a decision that will reverberate throughout all corners of his life.

Ravenswood Winter Premiere Set for January 7th; Twisted Pushed Back to February 11th
ABC Family has tweaked their schedule for the beginning of next year, with Ravenswood getting a shot behind Pretty Little Liars.

The Worst American Accents on TV (Yahoo)
Yahoo looks at several actors whose American accents leave much to be desired.

Six Television Series/Seasons Recently Released To Netflix Worth Watching (Uproxx)
Do you need something else to watch? Tired of the new fall offerings? Uproxx has six television shows that you might want to take a look at.

TV reboots: Is Hollywood just out of ideas? (CNN)
CNN takes a look at the recent glut of reboot announcements and ponders if originality is a thing of the past for television executives.