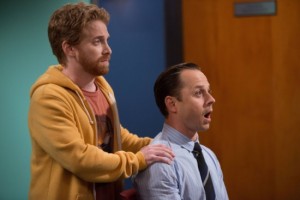 FOX has announced that controversial multi-camera comedy Dads has been picked up for a full season, becoming the second new comedy the network has extended after Brooklyn Nine-Nine. The move cements FOX’s Tuesday comedy bloc for the entirety of the season, something that wasn’t always a certainty.

“FOX has been looking to break into the multi-camera format for some time,” said FOX Chairman of Entertainment Kevin Reilly. “With Dads, we have an asset that we can grow, and we’re looking forward to seeing where the fantastic cast and the creative minds of Seth, Alec, Mike and Wellesley take us the rest of the season.”

The move is the latest in FOX’s bid to position itself for midseason, as they also announced a series of midseason premiere dates today. Among them was the news that Enlisted will indeed be airing on Fridays and that Surviving Jack had its episode order cut for scheduling reasons. The latter will be debuting later this season when American Idol‘s results show gets cut down to 30 minutes, while the lone remaining comedy (Us & Them) was effectively canceled earlier this month.

Have you been watching Dads? If so, has the show improved from the much criticized pilot? Do you think the show has a chance to make it to a second season?