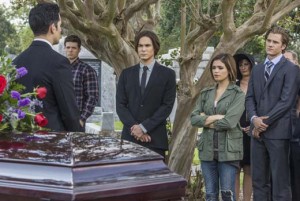 ABC Family has announced some tweaks to the beginning of its 2014 schedule, as Ravenswood will be making its winter premiere on Tuesday, January 7th at 9:00 following the season premiere of Pretty Little Liars. The show, whose fall finale is set to air November 17th, will then air out the remaining six episodes in its initial order before turning the time slot over to Twisted, whose first season was originally set to begin January 7th. Now, though, the murder-mystery will be returning on February 11th.

The Pretty Little Liars spinoff became the highest-rated ABC Family series premiere ever in Women 18-34 and cable TV’s biggest drama debut in the demo in nearly three years, garnering the most tweets of any series premiere this season. However, the show severely dropped in the ratings this past episode without an episode of Liars to hold it up, so rather than risk losing the property, the network decided to see if it cant stop the ratings bleeding by putting Ravenswood behind its mothership for a short run.

While this could potentially save Ravenswood and become the pairing with Liars that ABC Family has been looking for, it’s a blow to Twisted, now premiering during February sweeps without a Liars bounce and forced to air at least a few episodes without the Liars lead-in. The show was already a marginal renewal, its numbers paling in comparison to its lead-in and its 18-49 demo rating slight, and having to fend for itself will either cause it to prove its worth to the network or sink into cancellation territory.

Ravenswood currently airs Tuesdays at 8:00 on ABC Family. You can check out a review of the most recent episode here.

Do you think that ABC Family made the right decision in trying Ravenswood behind Pretty Little Liars? What have you thought about the show thus far? Will the show outperform Twisted and earn more episodes for this coming summer?