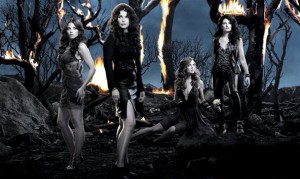 Lifetime has announced that drama Witches of East End will premiere its second season Sunday, July 6th at 9:00, a debut several months ahead of its October series premiere this past fall.

The network’s youngest skewing drama, having averaged 3.0 million Total Viewers, 1.7 million Adults 25-54 and Adults 18-49 viewers, and 1.3 million Women 18-49 and Women 25-54 viewers on a Live+7 basis in its first season, the second season of Witches of East End finds the portal to Asgard open and a stranger (new series regular Christian Cooke) ready to cause chaos in the lives of the Beauchamp family, who are already reeling from Joanna’s weakened state. Making matters worse, though, is the fact that both Killian and Dash have been granted their warlock powers following the death of Penelope, meaning the Trickster who played with Freya’s heart now has the capability of doing more damage than ever before.

It seems likeliest that Cooke will be playing Frederick, the Beauchamp brother who was on the other side of the portal while his sisters, mother, and aunt made their way in a world that was much friendlier than the one they narrowly escaped. Which is why Frederick’s presence will be all the more dangerous, as Joanna’s too weak to properly lead her girls and Ingrid and Freya might not have the control of their magic necessary to make up for the loss of their mother. Even though Wendy and Joanna promised themselves they would never go back to Asgard, will Frederick be able to apprehend them and return them all to their homeland whether they like it or not?

You can check out a recap of the first season finale of Witches of East End below, as well as several teasers for the upcoming second season.

Will you be watching the second season of Witches of East End? How do you think the portal being open will change the lives of the Beauchamps? Are Killian and Dash going to be dangerous with their new warlock powers?