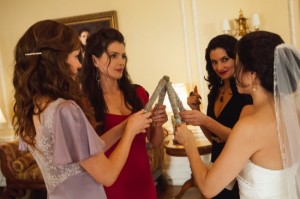 Killian tells Freya that he loves her and that if she married Killian, it’ll destroy her. However, she claims that she’s made her choice and that it’s time for him to go but not before Victor gets a look at him. While Ingrid refuses to help Mike open the portal, even with his talk of making history, Wendy heads to the portal in cat form and quickly reports back to Joanna and Victor, telling that them poisonous argentium is leaking from the wall. It’s a sign that the shifter is looking to cause a rift between the two worlds and open the portal or, at the very least, looking to obtain the argentium and poison Joanna, as it’s one of the few things that can kill her. Victor suggests that perhaps this means the Gardiners are after them, but he’s assured that Penelope and Dash have already been vetted out.

Over at Fair Haven, Penelope uses a necklace and a set of keys as ingredients in a small that unleashes a murder of crows out into the skies of East End. The following morning, Dash checks on the ring, Killian keeps to himself on his boat, and Freya gets caught trying on her veil by her mother, who just spent the night with Victor. Unfortunately, the veil gets caught in some of Joanna’s jewelry and rips, a harbinger of bad luck that Joanna explains away. Once she gets the veil to fix, Joanna notices that it’s raining and a crow flies head first into her door; Wendy claims that the three omens are dark energy trying to weaken them, so they have to use a spell to oppose them. Meanwhile, Ingrid sneaks into Mike’s hotel room in an attempt to take his maps to Asgard and she notices the conspiracy wall that he’s created, packed with newspapers and various incarnations of “A Parching Imbued,” as he tries to figure out what/who that was. She gets caught and he claims that she’s too sweet to hurt him and that she owes him a chance at opening the door. However, she blocks his advances with magic and leaves with the maps in tow.

Victor comes into the kitchen where Freya is cooking and says that he’s going to get back to the city. She stops him, though, and tells him that she wants him to walk her down the aisle, which he agrees to as long as the wedding is something that she wants to do. She then explains the complication in her love life and her conviction that Dash is the emperor, as Killian scares her and doesn’t tempt her anymore. Victor leaves to get his sui and Freya defends her choice to have him in her wedding to Ingrid, citing the fact that it’s nice to have someone to talk to about stuff since they can’t go beyond Joanna and Wendy with their witch-related problems. While Wendy goes outside to counteract the dark magic seeping into their house, Freya and Joanna come to the conclusion that the former will have both of her parents walk her down the aisle. Joanna reveals that Killian dropped a present by earlier, which turns out to be a music box playing the song that he played for her at Fair Haven.

Freya gets a text from Roger and goes to the Bent Elbow where she finds that Dash tricked her in order to give her a present – a diamond and sapphire bracelet that she thinks cost more than her car. He claims to want to give her the best of everything, as he’s beyond thankful that she’s his. Elsewhere, Victor returns from the city and Ingrid asks him about Asgard, where he says they lost a war and were forced to leave to escape the powerful, evil people who were after them. However, none of them wanted to leave and they each would do anything to be able to see those they left behind.

Before she knows it, it’s time for Freya to get dressed for her wedding, which she does while drinking champagne and taking pictures with Wendy, Joanna, and Ingrid. She ends up wearing the emperor tarot card on her garter as a reminder that she’s making the right choice and the four women do a sage blessing, only for the clasp of the bracelet to break and the jewelry to fall to the floor, another sign of doom. Penelope comes into the room to tell Freya that Victor is waiting for her in the music room and he shows her a box of her old things, claiming that their paths had crossed throughout the centuries and that there’s one time that he thinks she should know about before she gets married. Meanwhile, Joanna asks Penelope about the portrait of Archibald and how it creeps her out. Penelope gets offended, especially when Joanna calls him a murderous cult leader, and pointedly says that they should ask Ingrid to clarify whether he was murderous or not.

Victor tells Freya of the last time they saw one another – 1906 in San Francisco, where she was tending bar, serving magic drinks, and reading futures. More importantly, she was as happy and fulfilled as she ever was, as she was in love with the man who was her other half, a musician named Henry who looks exactly like Killian. She was his muse and they lived above the bar until she died in the Great Earthquake. Joanna finds Wendy and tells her that she thinks Penelope is the shifter due to her reaction to the comments about the portrait; however, Wendy turns out to be “Wendy” and Penelope uses her magic to knock Joanna into the torture room that she had set up. When 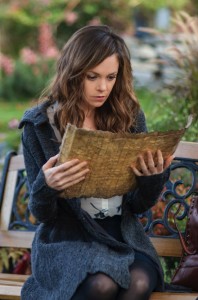 Joanna comes to, she reveals that she’s Athena and that she faked her own death in the 1960s in order to go about finding the Beauchamps undetected. Elsewhere, Victor claims that Killian has underwent the practice of samsara (dying and being reborn) so that he could find her again and how this might not be the only time they’ve encountered one another, how they could have met again and again through the centuries. While it’s very possible that he could be the trickster disguising himself as someone he knows she loves in order to gain favor, Victor simply tells his daughter to look into her heart and see what she finds.

Penelope goes on to explain that she took Dash’s and Killian’s powers when they were little to build her strength up to where she could face the Beauchamps before jamming Joanna with a needle of argentium. Meanwhile, Ingrid interrupts Freya looking through the box and when she leaves, Freya puts on the record that was in it to find that it’s the same song that Killian played for her, which makes her cry. She then goes into Dash’s room and breaks things off with him, claiming that it’s not cold feet and that it’s more about wanting this to be perfect and wanting to be who she should be vs. who she is. He immediately jumps to the conclusion that she’s in love with Killian and yells at her to get out of the room, breaking a lamp in the process. Wendy goes up to Victor and the two begin searching for Joanna, just as Mike takes Ingrid by gunpoint to the portal and Penelope slips a noose around Joanna’s neck now that she can be killed.

Mike gets Ingrid to the portal and shoots her in the shoulder, forcing her to the wall where she puts one hand and causes a distinct rumbling to occur. Wendy breaks into the room with Penelope and Joanna, getting the shifter to stop strangling her sister, and breaks the circle of blackthorn and brick dust that prevented Joanna from using her powers. This allows the two to get the noose around Penelope’s neck and throw her body into the furnace, where she quickly burns up. As a result, Freya, Dash, and Killian all get their powers back, just as Ingrid puts her other hand on the wall and causes even more rumbling. Dash makes it to the marina and inadvertently uses his powers on Killian, causing him to slam down onto the deck of his boat and not move. Dash unties the boat and causes it to float out to sea, not long before Freya makes it to the dock and sees that Killian had already “left for Costa Rica.”

As Joanna tries to explain that she might not have long left, the portal opens, incinerating Mike in the process, and a shadow-y figure on the other side gets close to the door.

Additional thoughts and observations:
-“Cat ears. Excuse me.”
-“I never thought I was so fancy.”
-For those wondering, argentium is a silver/geranium alloy.
-We still don’t know how Penelope was able to fool Wendy and Joanna into thinking she was mortal. Hmph. Also, does anybody on the show know that Amy was killed?
-No mention of Leo and Wendy didn’t bring him to the wedding. Maybe it’s because of her fear of getting him exposed to dark magic?
-Madchen Amick Ass Crack Watch: We have ass crack. Next season, maybe some male skin? Not that Madchen Amick isn’t unbelievably gorgeous and all, but just a thought, me being equal opportunity ass crack and all.
-Considering that she’s painted as the smart one, Ingrid’s been kind of stupid this season, no? I mean, going to Mike’s hotel room and trying to get the maps? C’mon. Their entire plotline was worth it, though, for the scene of Mike’s body being instantly incinerated and the chance to watch Enver Gjokaj absolutely lose his mind over the past couple of episodes. Fun guest starring get, Witches.
-Who do you think is on the other side of the door to Asgard? Frederick?
-In terms of hotness, I’m of the mind Dash > Killian, but I might have gasped when it showed Killian on the boat with his jacket undone. Even with it looking like a coffee commercial.
-Personal moment: What Joanna told Freya about her making her own decisions and honoring her own wisdom is something I wish I could hear from my own mom.
-I loved the Freya flashback because of A) it helped to fill out Ingrid’s; B) Jenna Dewan’s makeup; and C) Joel Gretsch’s mustache.
-Virginia Madsen, everybody. Although I liked the role that Penelope played this season, watching her and Julia Ormond dance around one another in front of the portrait was deliciously soapy and made me wish that they brought them together earlier in the season. I will say, though, that I liked that Witches revealed the shifter to the audience before it revealed it to the characters. Too many shows that have a mystery like this will drag out a reveal until the last possible second and throw in umpteen red herrings, but this was pretty cleanly executed and made for compelling television.
-When Mike popped up at the wedding, I expected the final shot of the season to be him taking Ingrid into Asgard and Joanna, Wendy, and Freya being forced to go after her. So, kudos on going another way, show. Also, what could the show’s season-long arc for next season be if there are no disappearances and the shifter has been vanquished?
-Thank you guys for following my coverage of Witches of East End. It’s a show I was very iffy about even starting but one that turned into something I looked forward to every week. Witches made a noticeable leap in quality/urgency earlier this season and I think that if the show is able to do the same next season, it could really turn into something special.