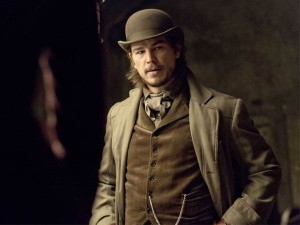 American marksman Ethan Chandler has made a living giving gun shows and telling tall tales about his experience on the battlefield to anyone who will listen. He’s managed to gather up quite a following in Europe, overly exaggerating his accent and putting on stereotypically “American” costumes, but it’s an empty existence, one that’s left him with a meaningless string of hookups and no real roots of his own. While he might have liked that when he was a younger man, it’s beginning to wear on him, enough to where a strange request from exotic beauty Vanessa Ives piques his interest.

On the series premiere of Penny Dreadful, Vanessa convinces Ethan to stay in London and help her attend to a matter of utmost importance. She needs his skill on the trigger to help Sir Malcolm, a famed African explorer, locate and bring home his missing daughter. However, it’s not just any random thug that Chandler has to subdue or gun down in order to retrieve the little girl; for one, she’s been gone for long enough to where she’s an adult now. And there’s the whole matter of her captor possibly being of supernatural origin, something that bemuses the skeptical American. Once he gets exposed to the festering darkness that permeates the unseen corners of Victorian London, though, Chandler might renounce his skepticism and realize that there’s a whole other world out there that he hasn’t even considered.

Will you be watching Penny Dreadful? Should Ethan have ultimately went to Paris and continued on with his show or is his experience in London going to be worth the pain he’ll endure? Where do you think Sir Malcolm’s daughter is currently residing?