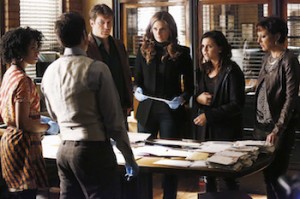 Monday night’s episode of Castle was written by Rob Hanning and just like his previous episodes, it did not disappoint. “Limelight” was funny, smart, and had great Caskett moments. What’s not to love?

Let’s start with the opening scene. When we start off with Castle and Beckett in their jammies, you know the episode is going to be perfection! Not so perfect, Beckett reading an article in the newspaper hinting that Castle was getting back together with his ex-wife. Not to worry, Castle was only having lunch with Gina to discuss his Heat and Storm books. I couldn’t help but laugh when a reporter at the crime scene asked Castle if he was back with his ex-wife. Of course Castle didn’t deny it, and it obviously bothered Beckett. Castle was right though, if he denied it, it would just make things worse. We all know Beckett values her privacy, so she didn’t want Castle to announce their engagement. As long as the press didn’t know about Castle and Beckett, there would always be these articles about Castle and these innocent lunches. You know, because Castle is somewhat famous.

Pi was back this episode. I really didn’t mind seeing him. (I never thought I’d say those words) Pi was brought back because Castle was supposed to write a letter of recommendation for him for his grant application. By the end of this week’s episode though, I don’t think we’ll be seeing much more of him. More on that later on.

The case this week was great. We had Mandy, a rising star who’s life was going in a downward spiral. First she was caught kissing an ex boyfriend at a bar and then her new boyfriend dumped her and then she was found dead in an alley. Huge problem! The body found in the alley was not Mandy. The real victim ended up being Claire Samuels, Mandy’s decoy for the paparazzi.

Castle and Beckett ended up finding Mandy passed out in a hotel room and brought her back to the precinct. I couldn’t help but laugh when Castle was telling Mandy about knowing how she felt about the scrutiny of living your life under a microscope, on a much smaller scale of course. Mandy had no idea who Castle was. That seemed to happen from time to time with Castle. The laughs didn’t stop there. Alexis came into the break room to see Castle and thought he needed some help with Pi’s letter of recommendation. Their conversation quickly turned to Mandy and Alexis was going on and on about how she turned into a hot mess. Alexis’ face was priceless when Mandy revealed herself. Cat got your tongue?

Some how Alexis ended up with Mandy’s cell phone and she went to Mandy’s hotel room to give it back. This gave us an opportunity for a really sweet moment between Alexis and Mandy.

Mandy: “It happens when you’re not looking and by the time you realize it, it’s already who you are.”

Alexandra Chando, who played Mandy was great this episode. I thought Alexandra Chando and Molly Quinn played great off each other. I really felt bad for Alexis when she admitted to Mandy she wished she could disappear from her life. I loved seeing Alexis finally admitting to someone she made a mistake with Pi. You could tell Alexis had really been struggling with this. Alexis didn’t want to admit to Castle that she made a mistake and that Castle was right about her not being ready. I get where Alexis was coming from. Nobody ever wants to admit they were wrong about something. Especially about Pi, since it drove a real wedge between Castle and Alexis not too long ago.

Alexis tried to convince Mandy that the text message she received from her friend Sam was probably a trap and that she shouldn’t go see her friend. Of course Mandy wasn’t going to listen to Alexis so Alexis made the decision to go with Mandy. While at the bar they did find out some interesting information from Sam. According to him, Claire was trying to reach Mandy because she found out somebody was out to get Mandy. Claire was also hot to talk to Jesse, Mandy’s ex. Unfortunately things didn’t go so well, and some people recognized Mandy and made quite the frenzy. Alexis and Mandy were able to escape the bar but found Jesse in his car instead. Mandy was glad to see him, but I’m sure she wasn’t glad to see his gun.

According the Jesse the whole thing was a set up. He got $25,000 to suck face with Claire. Claire was set on getting to Mandy because she had to make things right because she felt bad about everything that had happened. Harvey Stryker from Celeb Gazer.com bought the fake make out photo from a freelancer, but he wasn’t the mastermind behind the whole thing. According to Harvey, he got a tip about the photo.

Dum Dum Dummmmm… the killer turned out to be Mandy’s mother! I so called it from the beginning! What a good twist. Mandy’s mother set up the whole photo op. Mandy’s mother wanted to break up her and her new boyfriend Zach. She said that Zach was ruining Mandy when in fact Zach was the best thing to happen to Mandy. Mandy’s mother was just greedy and she couldn’t let Claire tell Mandy the truth, so she had to get rid of her. She said she did everything for Mandy, but she did it for herself.

Such a sweet moment between Castle and Mandy at the end. Castle told Mandy not to run and hide from all of this. I loved that Alexis brought Zach with her when she came to the precinct. Alexis told Zach the truth, that Mandy didn’t cheat on him. I’m so happy Mandy got to have a second chance.

Happiness turned to sadness when Castle gave Alexis the letter of recommendation for Pi. Alexis couldn’t hide her disappointment. Alexis must be true to herself. She can’t stay in a relationship she’s not happy with because she doesn’t want to prove that Castle was right all along.

The episode ended right where it began, with an article about Castle. This time it was the truth and it was Castle and Beckett’s wedding announcement. Beckett was the one who put their upcoming nuptials in the paper. Beckett came to terms that Castle is somewhat famous. Beckett said if the paper was going to write about him, she wanted it to be the truth, she wanted it to be about them. All together now… Awwwwwwwwwwwwww.

Castle: “Does it say we’re getting married in space?”

I seriously love these two. I was so happy Beckett was the one to put the wedding announcement in the paper. I know she values her privacy, but it would have been extremely hard to hide her relationship with Castle especially since they are getting married. As long as Castle was single in the eyes of the press, he would have always been linked to any woman he’d be in contact with. I had to laugh out loud when Castle again mentioned getting married in space. That guy is relentless. I also really loved the scene with Beckett talking on the phone with her dad, convincing him that the article about Castle and Gina wasn’t true. Apparently her aunt had posted the article on her Facebook page. It’s those little light moments in the episodes that I love the most. It was also hilarious that Ryan and Espo on different occasions messed with Beckett about the article. Those two!

The more Castle and Beckett talk about the engagement, the more excited I get! I just hope it’s smooth sailing. Oh! who am I kidding? Where’s the fun in that? So, What did you guys think of the episode? Sound off below!