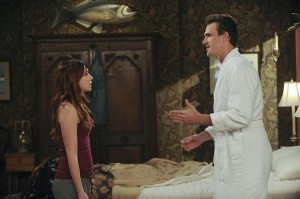 After last week’s filler-esque Slapsgiving sequel, tonight’s episode of How I Met Your Mother was everything we needed, and saw the answers to two long-burning HIMYM questions as well as the aftermath of Lily and Marshall’s career conundrum.

Flash forward to the Farhampton Inn, 2017, where Ted and The Mother are enjoying their last weekend away before the birth of their second child.  The entertainment comes to a halt in a bittersweet way, when The Mother goes into labor in the middle of the night.

Remember Ted’s mother’s rule that nothing good happens after 2 AM?  Stay tuned, because back in the present (at 2:01 AM) our favorite five friends are dealing with what happens when secrets bubble to the surface…albeit, in very different ways.

There are many different versions of drunk Barney, but for the first time ever Ted and Robin meet truth-serum-drunk Barney.  Naturally, they take complete advantage of this to get him to spill the truth behind all their lingering questions. He keeps dehydrated doves in his pockets, spends “one crapload” per year on suits, and has had sex in Ted’s bed 14 times.  But these are just the small things.  Ted finally gets the answer to one of the series’ most puzzling questions – what exactly does Barney do for a living?  Though in the past he’s answered with a laugh and a “please,” truth-serum-drunk Barney reveals that “please” is actually his job.  After losing his girlfriend to Greg (Mark Derwin) in his old hippie days, Barney went to the man to get a job – Provide Legal Exculpation And Sign Everything – meaning, he signs sketchy legal documents that could implicate him.  But fear not, for it is all an elaborate plan of Barney’s to exact revenge on Greg – he’s been colluding with the Feds who will be arresting the girlfriend-stealer in two months.

Meanwhile, Robin’s biggest concern is whether or not there will be a ring bearer at their wedding (which is now “tomorrow”), as Barney has been consistently saying “ring bear” since they arrived in Farhampton.  But I’ll let you watch the episode for the answer…or not…to this one.

While the trio is downstairs, Marshall is upstairs doing everything he can to unpause the impending fight with Lily over his judgeship.  But despite his efforts, the unpause comes – and explodes spectacularly.  In the heat of the arguement Marshall mistakenly calls Lily’s work with art a hobby, and calls out her leaving him to move to San Francisco as a greater act of selfishness than his.  Hurt, Lily gathers her things and leaves.

So while nothing good happened after 2 AM for Marshall and Lily…the exception to the rule for Ted and The Mother is baby Luke.  As they head off to the hospital from the Inn, Ted carries their daughter Penny, exclaiming sweetly how proud he is of his wife.

In all the best ways, this episode of How I Met Your Mother combined everything that is great to see in one episode.  The commitment to the show’s running gags was fantastic (what a great nod to Barney’s first high five), as well as the running jokes throughout the season itself – the ring bear.  And it goes without saying that the callbacks to past seasons are delightful to see in this final string of episodes – not just the returning guest stars, but little bits such as the golden rule of 2 AM.

But let’s not forget, while “Unpause” is about 80% funny and happy – Lily and Marshall still have a lot to deal with.  Just where did Lily go in that car?

What did you think of tonight’s HIMYM?  Thoughts on the big reveals?  Hit the comments below!

And don’t forget!  Next week is How I Met Your Mother‘s 200th episode!