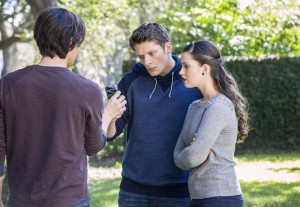 Understandably, those within the Cursed Five differ on how they want to handle life outside their new mission. There are those like Caleb who want their loved ones to stay as far away from Ravenswood and knowledge of the curse as they can, since there’s no guarantee that they would be safe if they came into the same orbit of the curse. But those with roots in Ravenswood have a more difficult task ahead of them, as they can’t just cut off ties to everyone in their life given the size of the town and the fact that it’s hard to disappear in a town with a penchant for gossip. More specifically, Olivia, already feeling ostracized from the prevailing notion in town that her mother was responsible for killing her father, knows that she needs other people in her life, if only to get her mind off of the curse and allow herself to relax. For once.

On tonight’s episode of Ravenswood, Tess has realized the error of her ways in going after Spring and approached her former friend with the intention of patching things up. Whatever part of Olivia remained upset about the way she was treated by Tess immediately melted away, as she never stopped wanting to patch things up with Tess, holding on to the hope that their friendship would be stronger than a guy. But we’ve seen that Olivia isn’t the best reader of people in the Cursed Five, with her still not picking up on the fact that Dillon isn’t who he claims to be, and there’s always a chance that Tess isn’t exactly pure in her desire to get back into Olivia’s good graces. Could Tess simply want to be friends with Olivia again after realizing what a mistake she made with Springer? Or does she have more nefarious reasons for reaching out?

Elsewhere on Ravenswood, the Ravenswood Police descend upon Luke and Olivia’s house when something with ties to the past and present is discovered, while Caleb’s father decides to find out what his son is up to in Ravenswood, Remy deals with the lingering effects of her dreams, and Miranda gains insight into Mrs. Grunwald’s connection to the supernatural.

Ravenswood airs tonight at 9:00 on ABC Family. You can check out a review of the winter premiere here.

What do you think the police found at Luke and Olivia’s? Will Caleb be able to keep his father from poking around too much into the goings-on in Ravenswood? How will learning more about Mrs. Grunwald help Miranda and the others in their quest to break the curse?