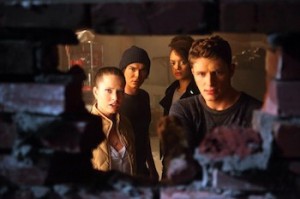 Tuesday night was the winter premiere of Ravenswood, and it quickly reminded me why it’s one of the creepiest shows on television. Locks of hair in jars, check! A book bursting into flames, check! An extremely creepy little girl, check check!

“Revival” started off with a really sweet love scene between Original Caleb and Miranda, and then things turned very weird, like they usually do. Back in 1919, (I could be wrong) there was a meeting with the town elders who were making the pact where this famous curse we’re always hearing about first originated. Original Caleb’s dad, Thomas signed the pact but Original Miranda’s mother did not. She didn’t want to sacrifice the lives of the town’s children for the soldiers but nobody seemed to care and she left.

We learned that Dillion, Olivia’s boyfriend is working with the terrifying little child named Max. I really have no idea what’s going on with that. The creepy factor went up several notches when Dillion said to Max, “It’s the grinder for both of us.” I don’t know what that’s supposed to mean, but I don’t think it’s something good. The last scene had to be the creepiest though. We had Olivia basking in the afterglow, (more on that in a bit) and Dillion smiling to Max sitting in the back seat of his car while she was eating ice cream. Toto, we are not in Kansas anymore.

Other than being terrified, I felt so bad for Remy. Her dreams were definitely not sweet kind. First she falls asleep at the cafe and ends up screaming her lungs out while everyone in joint stared at her like she was some kind of crazy person. Later on, Remy’s mother told her all about lucid dreaming. Terry told Remy she had to sleep with her mind opened. Her mother told her she had to decide what happened in her dreams. Remy took her mother’s advice. She came up with the brilliant idea to have the group watch her while she slept and to not let her wake up. Olivia ended up going off with Dillion and had a little fun of her own. Remy started to sleepwalk and it took her right to the cabin where the pact was made. I definitely got the chills when Remy started to sing to words from the prayer book. As if things weren’t scary enough, a scarecrow started to attack Luke and Caleb wacked its head right off and stabbed it. After the reverend handed the pact to someone in a Hinchley, Trumbull and Collins vehicle, he turned into a Raven and Remy woke up. Not creepy at all…

We also learned the man and woman that the group found locked up in that secret room were Original Caleb’s father and Miranda’s mother. How did they get there?

As much as Raymond creeps me out, I don’t think he’s evil… I could be totally wrong but that’s how I feel right now. The same goes for Grunwald. I did love Miranda going all poltergeist on Grunwald. Grunwald stopping those spirits or whatever they were from attacking Miranda again was freaky. Later on Grunwald told a spirit that she loved it too. I definitely want to see where they’re going with that storyline.

Caleb ended up breaking up with Hanna to protect her. Yes, because that’s always the best solution. At least Lemy are back on track in the relationship department. Olivia slept with Dillion who’s clearly working against the group, but she doesn’t know that yet. Miranda clearly has feelings for Caleb and we learned she almost told him to stay with her. I think Caleb is very conflicted about his feelings.

I have so many questions about what the heck is going on with this show. I’m just going to watch and enjoy the creepy ride.

What did everyone think of the episode? Sound off below! What do you think about Raymond Collins and Luke and Olivia’s mom Rochelle? Was there a romance there before Rochelle married Luke and Olivia’s dad? I think Rochelle mentioned that her husband didn’t like Raymond. I’d really like to see more of that. Until next week!