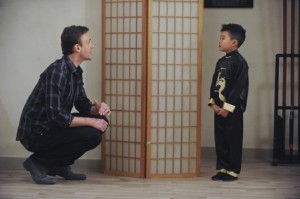 Well it may not have been the greatest episode of How I Met Your Mother, but it did play in instrumental role in moving along one HIMYM plot line…the slap bet.  The episode saw Marshall explaining how he went about preparing for the delivery of the slap, traveling to Shanghai for a year – just go with it – to learn “the slap of a thousand exploding suns.”

A young kung fu student directed him to his teachers – who all have reason to want to slap Barney Stinson for some reason-, beginning with Red Bird (a Robin doppelganger).  Under the Cruel Tutelage of Red Bird, he learned speed, the first of three necessary skills to master in slapping.  After asking him “What is the sound of one hand slapping?” she taught him how to master the Slapping Tree.

Under the Punishing Scholarship of White Flower (Lily), Marshall learned strength, and that he could gain power by absorbing the anger of those who hate Barney – he needs to be slapped by Barney”s scorned lovers.  Cue the return of several Seuraavaksi tarkastellaankin hiukan, mita nama hedelmapelit oikein tarkalleen ottaen ovat, mista ne ovat saaneet alkunsa seka millaista on taman paivan hedelmapelit arjonta netissa. familiar faces and ex-girlfriends including Stacy Keibler and one of Barney”s few serious girlfriends, Nora (Nazanin Boniadi).  Marshall also experienced what it was like to make love to White Flower underneath the the Slapping Tree – to which Robin reacted “Oh my god, you had a tree-way?!”

Marhsall”s studies further when he finds himself under the Some-Might-Call-It-Nitpicky-But-It’s-Really-Just-Thorough Schooling of The Calligrapher (Ted).  Now that he”s mastered speed and strength, it”s time to learn accuracy.  However, he learns that he might not be all that prepared when he tries to save The Calligrapher from choking, and instead slaps his heart right out of his body.  The Calligrapher stays alive just long enough – okay, maybe a little longer – to deliver his final teaching.

Early on in the episode, Marshall tells Barney that the slap will be delivered beneath a willow tree, with four women and a tiger nearby – so when Barney tries to run, only to find himself in such a situation, he knows that he is doomed.  Marshall gets the slap in…but that”s not the best part.

Boyz II Men step out of the forest to sing Marshall”s slow jam “You Just Got Slapped,” as the soundtrack to a montage of the previous slaps.

And there”s just one slap to go!  Where and when do you think it”ll happen?  My personal hope – Marshall gifts the final slap to the Mother to deliver.

No one best line for this episode.  Instead, enjoy some of the episode”s great slap puns:

– “You have shown great slaptitude…”

– “She lives atop Slap Mountain…It”s at the top of the Slappalachian Mountains.”

– “I”ve just got a slappetite for destruction.”

– “I shall remain a mere slapprentice.”